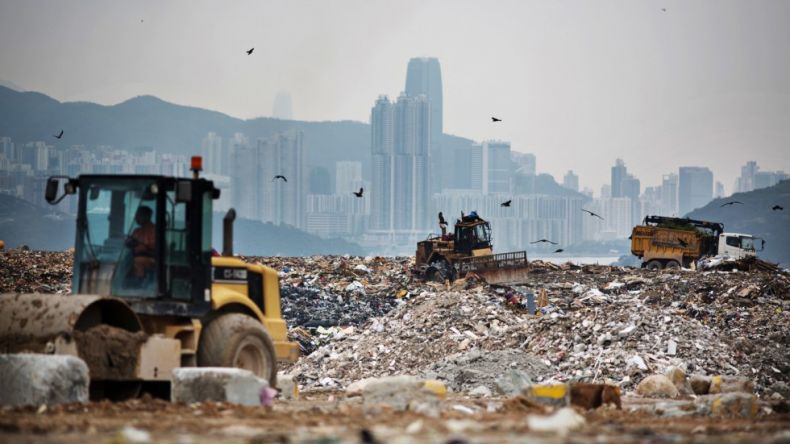 Hong Kong, one of the world's most overpopulated areas, is drowning in its waste. Photo Credit: SCMP

If you want a cautionary example of wasteful human activities run amok, look no further than Hong Kong. It’s not that residents of the Chinese territory are more wasteful than others in the developed world; rather, it’s that they have run out of space to store their trash.

One of the planet’s most densely populated cities, Hong Kong has some 7.5 million residents squeezed into a mere 2,000 square kilometers. And that’s on top of the 60 million people who visit the island each year, most from mainland China. 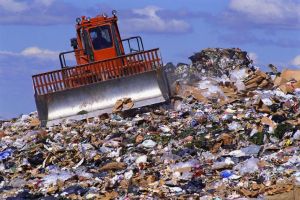 Landfills in the Chinese territory are fast filling up. Photo Credit: PInterest

Each of those millions of residents generates 1.4kg of trash each day, which is twice the amount that people in Tokyo produce. Over time all that solid waste adds up to a massive amount. In 2015 alone, the city produced 3.7 million tons of municipal waste. Much of that trash has ended up in coastal waters and on beaches, contaminating and befouling them. In fact, many of those beaches are so strewn with garbage that they resemble garbage dumps themselves. They are hardly inviting spots for holidaymakers, to say the least.

The city’s three current landfills, located at strategic points in the so-called New Territories, are fast filling up to capacity. Space at the  previous 13 landfills was used up long ago. “During British colonial rule which ended in 1997, landfills were the primary method for disposing of the city’s waste, which has increased nearly 80 percent in the past 30 years,” The Christian Science Monitor explains.

Within a matter of years (by 2019 or 2020, to be precise) the territory will have run out of space to store its garbage. “We are running out of space and in some areas people are moving closer and closer to the landfills,” Hong Kong’s undersecretary for the environment Christine Loh said. “We can’t really extend them too much more.”

It doesn’t help matters that, just like Malaysia, Hong Kong is a laggard when it comes to recycling. The territory lacks adequate recycling facilities and has been in the habit of shipping off much of its waste to the mainland. That, however, no longer works because mainland China feels reluctant, understandably enough, to continue to serve as the island’s garbage dump of choice. 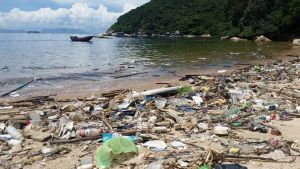 A beach in Hong Kong is stewn with garbage. Photo Credit: SCMP

The government in Hong Kong is building a massive incinerator to burn all that excess trash, or at least some of it. But that won’t exactly be a panacea, either. Environmentalists are warning that incinerating waste will exacerbate air pollution, which is already bad enough in the teeming metropolis.

Another idea floated by policymakers is to make people pay for their trash in a bid to get them to produce less. Similar schemes in cities like Seoul and Taipei have worked well, resulting in significant reductions of household waste. The new “waste charge” in Hong Kong would oblige locals to pay HK$0.11 (MR0.06) for each liter of rubbish they dispose of. “The economic tool – to get people to understand they are going to have to pay as they throw – is very powerful,” Loh offered.

What to do? For starters, we need to abide by the three R’s: Reduce, reuse, recycle. We need to waste less, not least food and we need to stop littering. We also need to dispose of your waste in environmentally friendly manners and transition towards far more sustainable methods of consumption and waste management.