Orangutans are Wonderful Creatures: They even Play Peekaboo 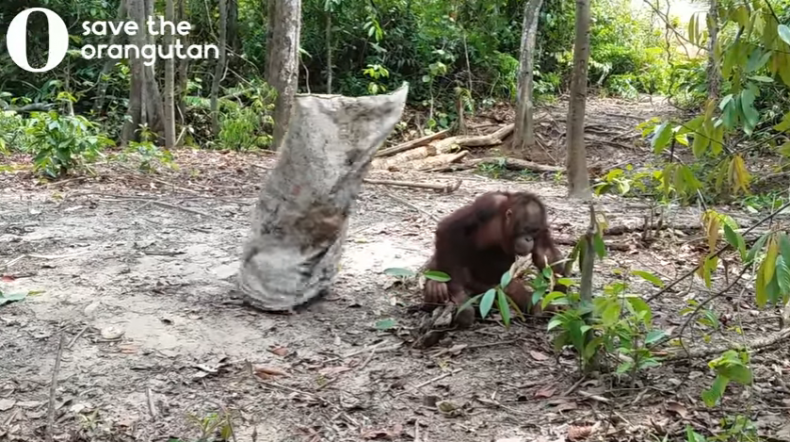 A young orangutan makes some mischief with a sack. Photo Credit: Save the Orangutans

No doubt you’ve seen kids do it: seeking the attention of their pal, they don an old sack and begin larking around. They playfully accost their friend, and when their friend just doesn’t get it, they carry on clowning around inside the sack so as to draw some laughs and a response.

Here’s something you might find surprising. Young orangutans are no different.

Specifically, a young orangutan at the Nyaru Menteng rehabilitation center in Central Kalimantan, Borneo was recently filmed climbing into an old sack and accosting a friend from behind in a forested area until that friend finally took the bait and began play-wrestling for a bit of fun. The video, which has been uploaded to YouTube, has been viewed a million times.

Then again, we should not be surprised by this creative bit of tomfoolery from an orangutan. Orangutans have long been documented to like fooling around with sacks and other objects and they are known to be very creative at making mischief for a lark. 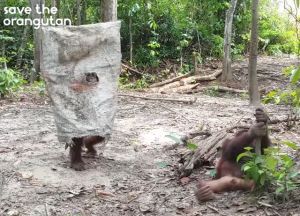 Peekaboo! Photo Credit: Save the Orangutans

We routinely anthropomorphize animals by attributing human thoughts and behaviors to them. This case, however, highlights how similar higher apes like orangutans really are to us in some ways. Having said that, indigenous Malaysians suspected that much long ago: the very Malay word “orangutan” they gave to this species primate in times past means “man of the forest,” indicating that locals thought of the animals as people in some other form.

And yet these playful and highly intelligent apes are often treated as if they were nothing but brute automata with no feelings and preferences of their own. We’ve been destroying their natural habitats at alarming rates. We’ve been taking their young so they can be kept as exotic pets in routinely miserable conditions. And some of us have even been hunting orangutans to feast on their meat.

So watch that video and remember: orangutans are wonderful creatures. They need all our help to continue thriving in the wild where they belong.