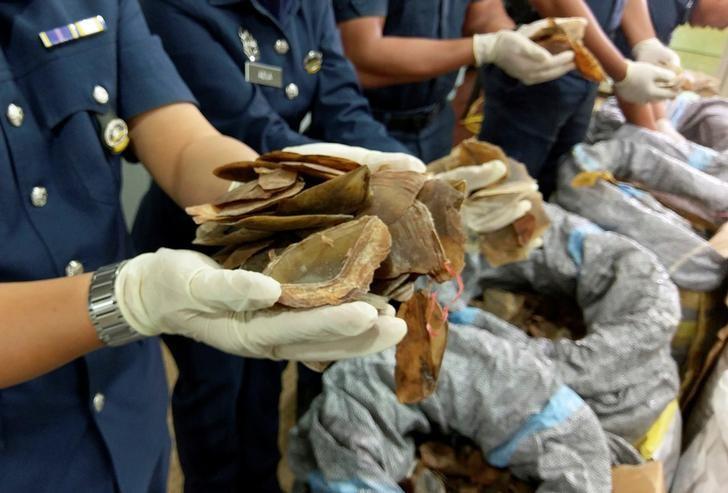 It’s not that there were any more proof needed that much of Africa’s wildlife is being decimated at appalling rates, but it has been provided again nonetheless. That evidence came in the form of 23 elephant tusks and 300kg of pangolin scales. They belong to the latest shipments of illicit animal parts that Malaysian authorities have managed to seize at Kuala Lumpur International Airport’s warehouse before they could be moved to their likely intended destination: China. The shipments, which would have been worth nearly $1 million on the black market in total, were into Malaysia from Africa.

According to customs officials the ivory, worth RM275,000 ($64,139), was smuggled in on a flight from Lagos via Abu Dhabi before arriving in Kuala Lumpur. They were marked as “food stuff.” Six sacks of pangolin scales, worth RM3.86 million ($900,291) and weighing 300kg, arrived in Malaysia round about the same time on an Ethiopian Airlines flight from the Congo. The sacks were marked as “fish maw.”

Decorative objects like this made from ivory are highly prized in China, but is driving elephants ever closer to the edge of extinction. Photo Credit: Wikimedia Commons

And so it goes. This year alone, eight large shipments of ivory, pangolin scales and other illegal wildlife products from Africa have been confiscated at KLIA. Despite repeated successes in discovering and confiscating illicit animal parts from smugglers, international syndicates are demonstrably continuing to use Malaysia as a regional transit hub with impunity. “We don’t have proof but I believe that they (trafficking syndicates) exploit our systems and procedures in these smuggling activities,” Mohammad Pudzi, a Malaysian customs official, offered.

Conservationists have raised the alarm about the extent of wildlife smuggling from Africa, whose populations of pangolins, elephants and rhinos are under grave threats what with the unceasing demand for their scales, tusks and horns in Southeast and Northeast Asia. Unless drastic measures are taken to stem the tide, pangolins in Africa and Asia will go extinct within a generation. All eight subspecies of the placid anteaters are critically endangered.

African elephants are hardly faring better. According to WildAid, as many as 33,000 of the pachyderms are killed each year for their tusks, which are prized as ingredients for jewelry, fashion accessories and decorative items. “The growth of newly affluent markets in Asia, predominantly in China,” the group notes, “allowed illegal markets to flourish, particularly in China. Corruption, poor enforcement and a lack of prosecutions have further contributed to the crisis.”

To make matters worse, most of the new supply of African ivory comes from elephants that have been killed only recently. Endemic poverty and rampant corruption on the continent help fuel a relentless trade in the poaching and trafficking of Africa’s famed wildlife. Some local agencies and international conservationist groups are doing all they can to stop the trade, but they will be facing an uphill battle until demand for elephant tusks, pangolin scales and rhino horns remain undiminished in Northeast and Southeast Asia. It’s the Asian market that is contributing to the mass death of wild animals in Africa, half a world away. 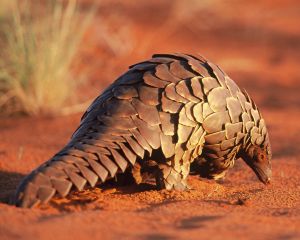 In an encouraging move, China, the world’s largest importer of elephant tusks, has pledged to shut down all its ivory carving factories and retail stores by the end of this year. But that alone will not suffice. Officials in Malaysia and elsewhere must remain vigilant.

In a welcome development, authorities in Ghana have recently arrested three men from an international syndicate that smuggled African pangolin scales US$1.2 million (RM5.14 million) from the west African country to Malaysia last June. They packed the scales, which weighed 400kg, into 16 boxes labelled as “oyster shells.” The scales were discovered by alert customs officials at KLIA.

As this case alone illustrates, trafficking syndicates never limit themselves to a single area or market in their nefarious activities. That’s why Africa’s wildlife tragedy is Malaysia’s tragedy too. By continuing to denude Africa of its rapidly diminishing wildlife, wildlife traffickers help entrench poaching and wildlife trafficking in Asia as well. By using countries like Malaysia as a smuggling hub and by keeping a steady supply of illicit fare flowing through the country, international syndicates contribute to a culture of impunity in Malaysia, which fuels homegrown demand for exotic animal parts and so endangers Malaysia’s own embattled wildlife.

That is why each and every one of us must do our part in helping roll back the trade in illegal wildlife products from Africa. We must refuse to buy any products that could have been obtained illegally from Africa. We must stop supporting the murder of pangolins, elephants, rhinos and other endangered animals by refusing to have anything to do with their exploitation and murder. And we must help nab those who continue to trade in exotic animals. If you see anything that could be illegal, say something to officials and conservationist groups about it. We, too, must remain vigilant.