A Wild Elephant is Shot dead in Sabah

Borneo's pygmy elephants are at risk from being killed by poachers and angry farmers alike. Photo Credit: WWF

The female pygmy elephant was found dead on a plantation just outside a forest reserve in the Kinabatangan area of Sabah. The adult jumbo, which was around 10 years old, was riddled with wounds from shotgun pellets. She might have taken days to die of her wounds in great agony.

The likely culprit: an angry farmer or plantation owner who decided to take revenge on the elephant for wading into his farm. “It could have been done by a trigger happy hunter or someone angry at it for causing damage to the palm trees,” said Augustine Tuuga, director of the Sabah Wildlife Department. “[W]e believe a farm owner or a worker might be the person responsible in shooting the mammal that could have trespassed into the farm,” he added later. 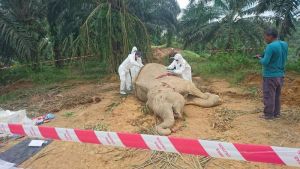 Dr Benoit Goossens, director of the Danau Girang Field Centre, called the murder of the elephant “sad and senseless.” That is what it is, yes. Masidi Manjun, minister of Tourism, Environment and Culture in Sabah, was no less equivocal. “What makes me really disappointed is some Sabahans don’t realise the importance of conservation of the Borneo pygmy elephants,” he said,

The minister vowed that local authorities would find the culprit and bring him to justice. “Borneo pygmy elephants are iconic to the state,” he stressed. “Sabahans should look at these beasts as one of the revenues contributing to the state tourism sector.”

The murder of this pygmy elephant comes not long after two other wild elephants were gunned down by poachers in Sabah last last year. The two male jumbos were found without their tusks, raising fears that poachers might start targeting Sabah’s wild elephants for their ivory. The state’s endemic pygmy elephants remain at grave risks from being killed not only by poachers but also by farmers who take umbrage at the animals trespassing into their plantations and feasting on their crops.