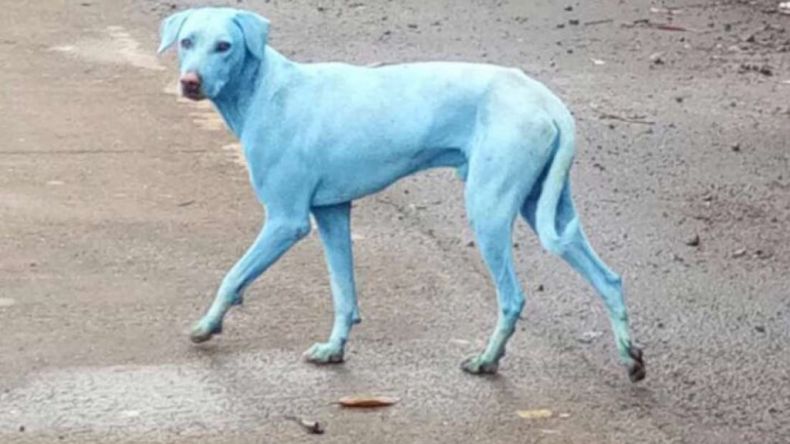 A stray dog with its fur painted blue walks on a street in Mumbai. Photo Credit: Facebook

We’ve all seen blue dogs. We’ve seen them in cartoons and children’s books. Yet in Mumbai some residents were recently surprised to see real-life blue dogs walk the streets.

In an industrial area of the Indian metropolis several stray dogs recently took on distinct bright blue hues. While the canines’ new color may be eye-catching, their changed appearance has raised questions about the cause.

The answer, it was soon discovered, was that toxic waste was to blame for the change in the color of the animals’ fur. The mutts acquired their new coloring after they had gone for dips or in search of food in the Kasadi River in Navi district where they live. The river, whose banks are flanked by hundreds of factories, is heavily contaminated by toxic waste.

The likely culprit for the change in the canines’ color is a factory that uses blue dye to manufacture detergents. According to local officials, the plant has discharged large amounts of dye directly into the river. “The firm does not have adequate air or water pollution monitoring equipment. This has lead to the emission and discharge of pollutants,” one official was quoted as saying in The Hindustan Times.

It appears that the stray animals are healthy and a downpour has since washed the blue dye off their fur. Yet this incident indicates the kind of wanton negligence that remains endemic across the region from India to China.

Make no mistake: Malaysia has not been immune from such negligence, either. Only recently it was revealed that several factories dealing with toxic substances have been operating in Penang, pausing potential risks to the environment.