Another Elephant Dies on the East-West Highway. For Shame 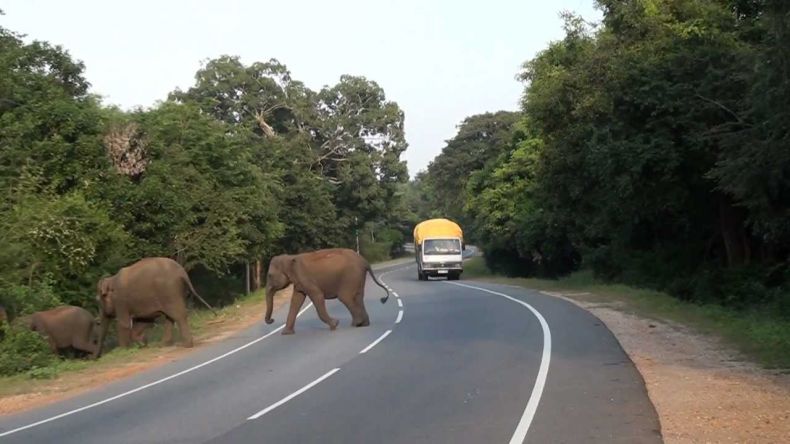 At certain roads and highways in Malaysia elephants regularly need to cross, which exposes them to the danger of being run over. Photo Credit: YouTube

The elephant, which was about 12 years old, was trying to cross the East-West Highway early morning when a tour bus heading from Jeli to Gerik barreled into the animal, killing him on the spot. According to the bus’s driver, the pachyderm had tried running across the road at a downward slope.

“The driver could not stop the vehicle in time to avoid hitting the elephant. The animal collapsed and then got up and walked to the grass on the road shoulder and died,” a local police chief in Gerik said, according to the Bernama news agency. The animal suffered massive wounds to his head. He tried to get back on his feet but soon collapsed and died. The tour bus’s front got badly damaged after it hit a mature bull elephant at high speed. Photo Credit: Facebook

The bus’s front got badly damaged, but none of the people onboard were injured. “Many [of us] sobbed uncontrollably at the sight of the dead elephant,” one of the passengers was quoted as saying.

The sight of an elephant dying in a road accident is certainly an awful spectacle that could well bring you to tears. Sadly, however, such sights may well become increasingly common on roads like the East-West Highway. In fact, they already have. As we pointed out last summer, the highway, which runs between the district capital of Gerik in Perak and the district of Jeli in Kelantan, remains a site of carnage for wildlife from neighboring forests, elephants included.

The wild elephants that live the Royal Belum State Park and Temenggor Forest Reserve are at especial risk. The animals often wander around the highway in search of food, especially in early morning and late at night when visibility is low. This is exactly what has happened again: an elephant dying while trying to cross a road.