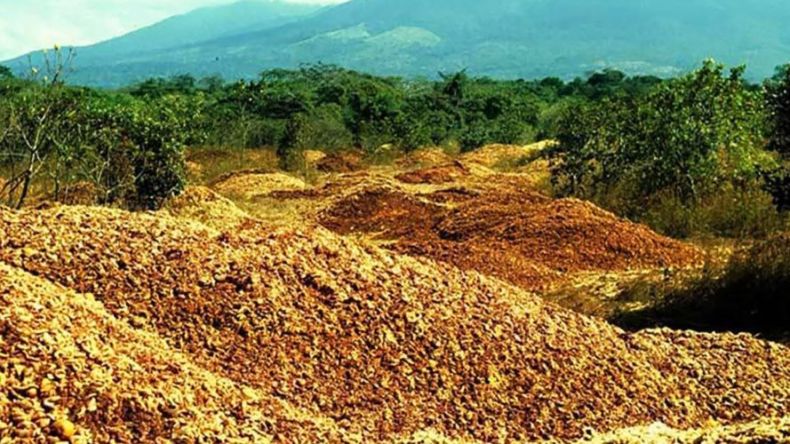 Costa Rica is a major producer of oranges, but local orange juice-making companies tend to have little use of orange peels. So in 1998 one of those juice makers dumped 12,000 tons of peels and leftover pulp on a barren 3-hectare swathe of former pastureland for cattle. Then everyone quickly forgot about all those peels.

Everyone except some researchers, that is. These researchers have found that in the two decades since, the peels, acting as nutrient-rich biomass, have helped generate a whole new environment in the formerly barren area, which now sports lush woodland with lots of vines. Quite an environmental turnaround. And not only that, but adjacent areas without the benefit of thick layers of peels on them have remained largely barren with only a smattering of scraggly trees, says Timothy Treuer, a researcher at Princeton University, whose team published a new study in the journal Restoration Ecology. 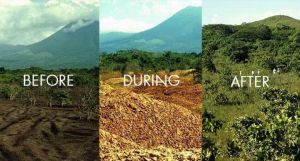 The transformation has been dramatic. Photo Credit: Princeton University

That barrenness is in stark contrast to the “overgrown jungle” that has sprouted over the peels and is now “so lush it required a machete to move through,” Treuer explains. “Once I was done picking my jaw up off the ground, I realized that I was looking at something truly special. It blew my mind.”

The site, the researchers note, has experienced a more than threefold increase in the richness of local woody plant species and a significant increase in aboveground biomass. That’s thanks in no small to the fertilizing effects of the large amounts of decomposing peels and pulp. “Hemispheric photography showed significant increases in canopy closure in the area where orange waste was applied relative to control,” they explain. “Orange waste deposition significantly elevated levels of soil macronutrients and important micronutrients in samples taken 2 and 16 years after initial orange waste application.”

So what? you might say. This happens all the time naturally. Decomposing vegetation, especially in large masses, serve as fertilizers for new vegetation. But this matters because we can draw lessons from this episode. Although it’s not entirely certain yet how the peels helped regenerate the site so dramatically, the very fact that they did could have useful environmental applications. “[W]e live in a world with nutrient-limited degraded ecosystems and also nutrient-rich waste streams,” Treuer says. “We’d like to see those things come together a little bit.”

In other words, lots of our organic waste could be put to good use in helping regenerate depleted natural environments. That’s certainly something worth thinking about in Malaysia, a country where tons and tons of food waste is generated daily and left to rot without doing any benefit to the environment.