Tapirs end up as Roadkill … Again 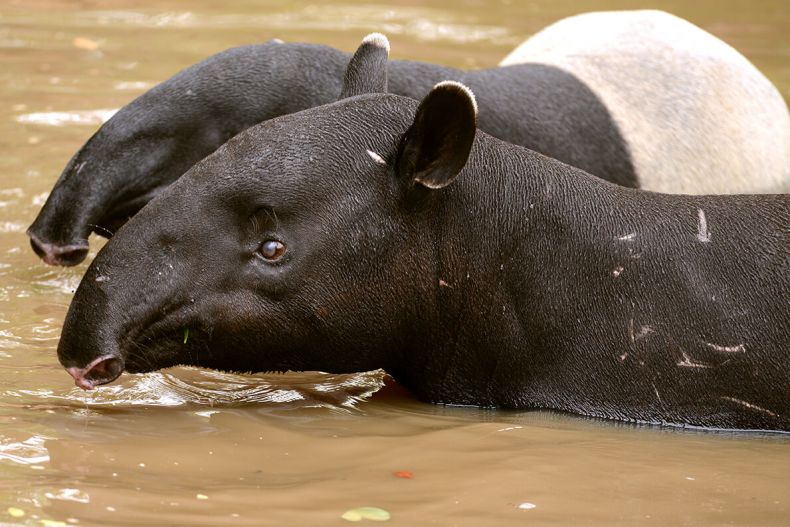 The road carnage must stop. Shortly after an adult elephant died after being hit by a tour bus on the East-West Highway in Perak, two Malayan tapirs suffered a similar fate when a passing car barreled into the animals at high speed on a carriageway in Pahang.

The two Malayan tapirs (Tapirus indicus) were trying to cross a road at night when they became road kill in almost an instant. The two fully grown animals, a male and a female, died of their injuries on the spot. Likely, the pair were foraging for food. “There have been similar incidents in the past including along the nearby Kuantan Port bypass road where the animals usually occupy the jungle and go out during the night to look for food,” Ahmad Azhar Mohammed, director of State Wildlife and National Parks Department (Perhilitan), said.

“Land clearing activities has ruined their habitat and the increasing number of activities near Gebeng here has forced the animals to travel further to find for food,” the Perhilitan director added. “A quick solution has to be implemented or else similar tragic road deaths could become more frequent.”

A quick solution must certainly be found. Officials have been calling on motorists to slow down and stay alert near forests, but such precaution alone is hardly sufficient. Rather, more roadside barriers need to be constructed so as to keep foraging animals away from cars. More wildlife viaducts and underground tunnels are also needed at roads passing through forests so that their residents can continue roaming unobstructed and without fear of being killed. Early last year, for instance, a female Malayan tiger pregnant with two cubs perished in a road accident near a forest reserve. Her fate could have been avoided with roadside barriers.

Make no mistake: road accidents take a terrible toll on Malaysia’s wildlife. Over the past five years more than 2,000 protected wild animals are known to have perished in road accidents, according to Wan Junaidi Tuanku Jaafar, minister of Natural Resources and Environment. That translates into at least one protected animal killed every single day on the country’s roads. Some critically endangered animals like tapirs are especially vulnerable with their numbers already at disturbing lows.

With only a few hundred Malayan tapirs remaining in the wild, losing more of them to road accidents, as happens fairly regularly, is a cause for concern. The animals have poor vision and so crossing roads at night exposes them to constant dangers. It doesn’t help that motorists and passersby themselves can act callously. “In the past there were cases when a tapir died in an accident, certain body parts including its tail, ears and tongue were removed by irresponsible individuals. In this case, the passing motorist were quick to alert Perhilitan,” the director said.