Kudos to Jackie Chan for being Ready to Rumble for Pangolins

The martial artist superstar is lending his voice and star power to a campaign to save the world's most trafficked mammals. Photo Credit: WildAid via Twitter

Critically endangered pangolins now have a new champion in China and Vietnam, the two countries where “the world’s most trafficked mammals” are sought most for their scales and meat. That champion is movie superstar and martial arts master Jackie Chan.

In a short video entitled “Kung Fu Pangolin” and recorded for the conservationist groups WildAid and Nature Conservancy, Chan trains three pangolins how to defend themselves with kicks and punches against rapacious poachers and wildlife smugglers. The video is lighthearted, in the vein of Chan’s celluloid oeuvre, yet it carries an important message: It’s consumer demand that is fuelling the mass killing of pangolins from Asia to Africa, and if we stop maintaining that demand, pangolins will be a whole lot safer in the wild. “Please never buy pangolin meat or scales,” Chan explains. “When the buying stops, the killing can, too.”

The killing of pangolins must definitely stop if these placid animals are to have any chance of survival in the wild. In the past decade alone some 1 million of them have been taken from forests and savannas in Africa and Southeast Asia, making all eight subspecies of the scaly mammals critically endangered. Hundreds of thousands of the animals continue to be killed each year. Only a few weeks ago, officials in Malaysia seized 8 tons of pangolin scales, which were on their way to China. An estimated 16,000 animals had been killed to get that volume of scales in just that one shipment. 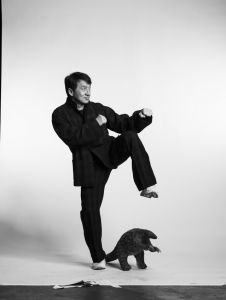 Jackie Chan is ready to rumble on behalf of pangolins. Photo Credit: WildAid

“Pangolins are one of the oldest mammals on Earth,” Zhao Peng, chief conservation officer for Nature Conservancy China, says. “A pangolin weighing just 3kg can help protect roughly 16 hectares of forest from being overrun with ants. Protecting pangolins is not just about saving an endangered species, but also about healthy ecosystems.”

Pangolins, also known as scaly anteaters, are shy and retiring creatures that come alive only at night and protect themselves by curling up into a ball at any sign of danger. Yet they are ill equipped to protect themselves against poachers’ snares and hunting dogs that can sniff their lairs out with relative ease.

“It’s crazy in this day and age that people are still eating these wild animals and threatening them with extinction. I hope we can persuade people that it’s the wrong thing to do,” Chan observes. By lending his voice and star power to regional conservation efforts, the martial artist, who is wildly popular in China and across Southeast Asia, may help reduce demand for the animals’ parts.

“The priority for pangolin conservation is reducing consumer demand and improving enforcement,”  WildAid’s CEO Peter Knights said. “Jackie reaches a vast audience across Asia and there are clear signs these campaigns have had an impact and attitudes are changing. Shark fin imports to China went down 81% in three years. Ivory seizures there were down 80% last year, and ivory and rhino horn prices have fallen by more than 50%.”

Campaign headlining celebrities and film stars can have a marked impact. Recently, plans for a controversial bridge that was to have been built in the Lower Kinabatangan Wildlife in Sabah were dropped after David Attenborough, a veteran English documentary filmmaker and globetrotting naturalist, joined the ranks of people calling on local government officials to scrap the project. Chan’s decision to join the fight on behalf of beleaguered pangolins may perhaps have a similarly marked impact.