Are Javan Tigers still Around? 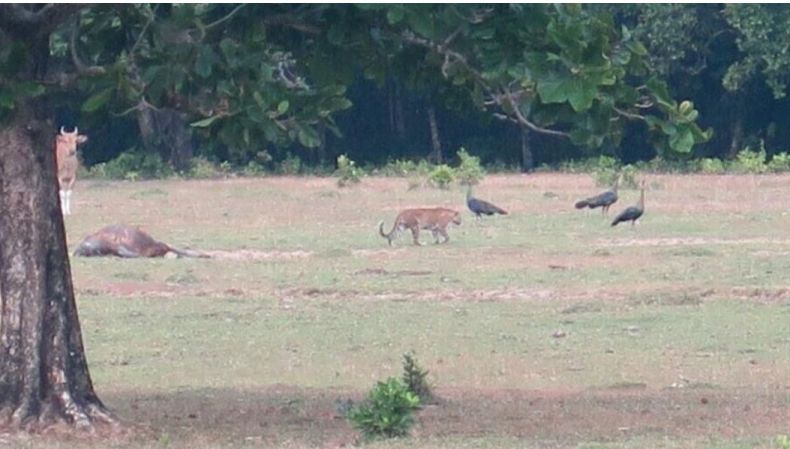 The photo, taken with a smartphone, is rather blurry and shows a wild tiger walking at a leisurely pace across a field beside three peacocks and a pair of banteng. There would be nothing unusual in such a sight in areas where tigers still roam, but there is this intriguing detail about the picture: it was allegedly taken on August 25 by a park ranger at the Ujung Kulon National Park in West Java and shows (again allegedly) a wild Javan tiger. 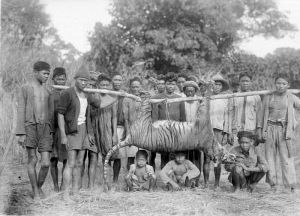 Local villagers in Java display a dead tiger they have just killed in this picture taken in the first half of the last century. Photo Credit: Wikimedia Commons

If the image is genuine, it would be fairly solid, if circumstantial, evidence of the continued existence of a few members of the subspecies (panthera tigris sondaica), which was declared extinct on the Indonesian island in the mid-1970s. At the very least, the image could prove that wild tigers still roam forests on Java, even if they may not belong to the now extinct subspecies. (For instance, they could be Sumatran, Malayan or Indochinese tigers that have been let loose or have somehow escaped from captivity and now survive in the wild within local forests.)

“My fellow ranger saw a large cat, but with stripes a bit different from the leopards usually found in Ujung Kulon,” Mamat Rahmat, head of Ujung Kulon Park, was quoted as saying. “Finally, he photographed it, and we suspect it is either a type of Javan leopard or another one of the large cats, such as the Javan tiger.” Tantalizingly, the park, a protected conservation area, was once home to numerous wild tigers before they were driven extinct by rampant poaching and habitat loss.

Indonesian wildlife officials are reportedly planning to investigate to try and find out whether a few isolated Javan tigers may  indeed have managed to survive undetected somehow for the past few decades. “Its markings are like the Javan tiger, but its posture less so,” the park’s director of Conservation and Natural Resources said. “The posture of the Javan tiger is bigger, more muscular, and shorter than the Sumatran tiger.”

Last year a photo allegedly taken at Mt. Arjuno in East Java showed a tiger walking on a path hedged by shrubbery. It, too, was presumed to be a Javan tiger, although wildlife experts cast doubts on the possibility that the area could be home to wild Javan tigers.