The Online Sale of ‘Exotic’ Animals Carries On. It must be Stopped 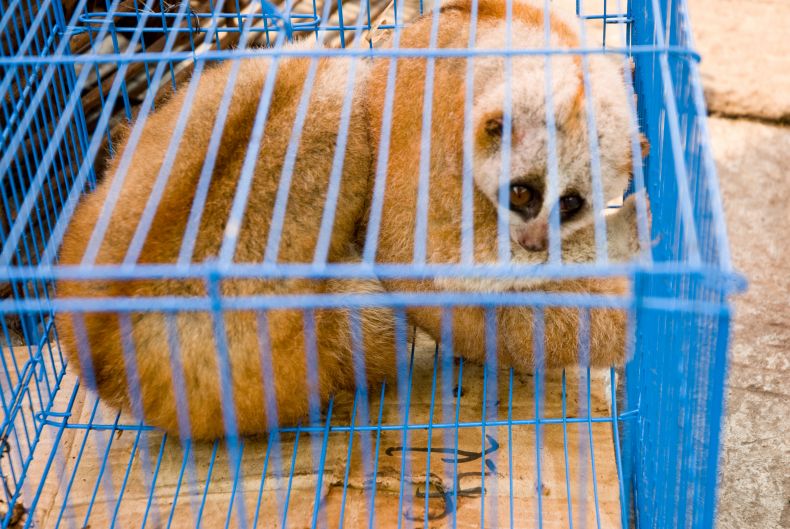 A pair of endangered slow lorises are on sale as "exotic" pets at a market. Photo Credit: Wikimedia Commons

Many Malaysians frequent Facebook, WhatsApp and other social media outlets to keep in touch with friends and relatives. Others, though, do so with a nefarious purpose: to buy and sell protected animals. Many of these animals are illegally traded “exotic” pets, which range from rare turtles to critically endangered hornbills, from slow lorises to Malayan sun bears, and from white-faced gibbons to clouded leopards.

Just how bad has it been? Pretty darn bad. According to a recent investigation of the illegal online wildlife trade by the conservationist watchdog TRAFFIC, hundreds of animals from protected species changed hand in just a dozen Facebook groups within just a few short months. “Just half an hour’s daily monitoring over five months by TRAFFIC researchers of 14 Facebook Groups in Peninsular Malaysia found more than 300 apparently wild, live animals for sale as pets, ranging from Sun Bears (Helarctos malayanus) and gibbons, to otters and even Binturong (Arctictis binturong),” TRAFFIC noted. 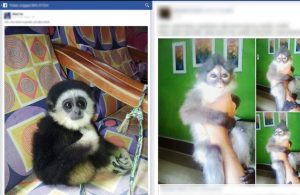 Juvenile primates are offered for sale in a Malaysian Facebook group. The social media platform has become a hub of wildlife trafficking from Malaysia to Vietnam. Photo Credit: Facebook

Nor is the situation better in Borneo. In Sabah, myriad traffickers continue to peddle endangered species on social media. “We bought a civet from a seller in Tawau. The civet was placed in a cage that was wrapped and transported using a bus from Tawau. No water or food was in the cage during the entire journey,” noted Dr Pakkeyaraj Nagalingam, a vet at the state’s Wildlife Rescue Unit.

Needless to say, most wildlife traffickers are no animal lovers and have little concern about the welfare of creatures in their possession. In fact, many trafficked animals perish before they reach their intended destination in someone’s cage or backyard. In this case, the long-suffering civet, which was to change hands for a mere RM250 before the authorities stepped in, did luckily survive.

To make matters worse, many “exotic” animals being sold online are poached from the wild. “One seller who was selling a pangolin explained that it was easy to catch them since they would curl up at the sight of danger,” the vet added, referring to the placid nocturnal animals that have been dubbed the world’s “most trafficked mammal” and are facing extinction in the forests of Sabah.

Sadly, there is little surprise in any of this. Online social media tools make it a whole lot easier for unscrupulous traffickers to reach a large audience and traffickers duly take advantage of such tools.

By the same token, however, we can also track their activities via the same tools. Malaysian authorities, spearheaded by the  Malaysian Communications and Multimedia Commission, have been doing just that by stepping up surveillance of online sites. “MCMC has its way to track who [these sellers are] and where they are,” said Augustine Tuuga, director of the Sabah Wildlife Department.

“MCMC can help us to locate their address but the wild animal may be kept somewhere else,” he elucidated. “We’re working closely with the commission but there’s still a lot of hard work on our part to arrest them. It’s not easy but we will get them.”

It’s not easy to stamp out thee trade once and for all, but we can all help. If you see any sign of wildlife trafficking online, do report it.