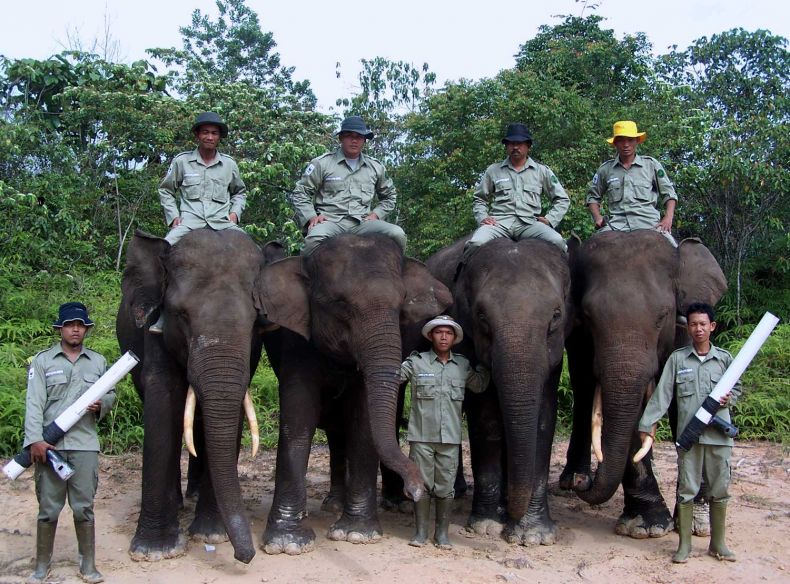 Members of a joint elephant-human Flying Squad in Indonesia pose for a picture. Photo Credit: WWF

When wild elephants begin trampling around plantations in search of food, they may unwittingly place themselves at risk. Irate farmers may take their anger out on the gentle giants by shooting or poisoning them. That is why officials and conservationists have to ask fast whenever elephants show up at plantations.

This is where a special rescue unit operating in Indonesia comes in. Called the Flying Squad thanks to the speed with which it operates, the unit involves four domesticated elephants and nine mahouts. Their job is to patrol parts of the northern border of Tesso Nilo National Park in Sumatra and ensure that wild elephants and local farmers can peacefully coexist.

As soon as elephants begin raiding orchards and plantations, the join pachyderm-human squad rushes to the scene to coax the wild elephants back into the forest. “Conflict can arise when people view these elephants as a threat to crops. The objective of the Flying Squad is to detect and herd wild elephants away from residential areas,” Didik Purwanto, a local expert, was quoted as saying by the Jakarta Post. 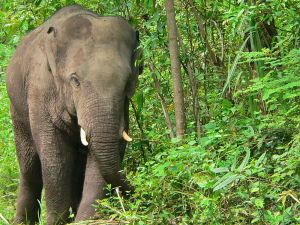 Wild elephants are often seen as pests by farmers. We need a change in attitudes. Photo Credit: Wikimedia Commons

“The task is to help herd them back, not to capture them,” he elucidated. “The team monitors the wild elephants twice weekly by tracking their movements to areas that are off-limits. When they do spot elephants or when there are reports of them leaving the national park, they are immediately herded back to the park to prevent them from destroying crops or even killing people.”

The initiative is a project overseen in part by the World Wide Fund for Nature and was set up in response to the increasing number of human-elephant conflicts in Sumatra. Such conflicts have intensified as a result of the ongoing loss of forests that wild elephants have called home. Deforestation has had a marked impact on local biodiversity while human settlements and plantations have also been encroaching on the natural habitats of the area’s pachyderms. Several elephants have been killed in recent years, likely by people working for local pulp mills and palm oil plantations.

The Flying Squad has been successful in reducing the number of deadly conflicts. “Local residents are happy with the Flying Squad’s presence, which is saving elephant’s lives as well as protecting community cultivation,” said one of the mahouts on the team. The idea is that wild elephants will respond better to the presence of other elephants and will be less likely to fight back than if they were faced with humans alone. Such flying squads have long been in use in places like India to monitor wild elephant herds and stop them from straying into cultivated fields and adjoining villages. They might come in handy in Malaysia too.