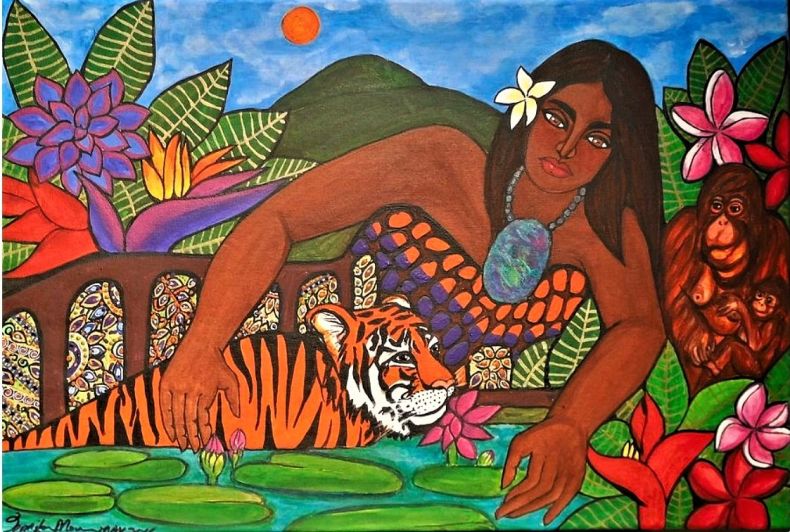 In one painting titled “Mother Earth Sustains,” a voluptuous woman suckles a young babe in arms while a tiger lounges by her side as if the stately predator was but a pussycat. In another artwork entitled “The Gift,” Mother Earth cuddles a tiger in a lotus-flecked pool beside an orangutan mother cradling her offspring. In both images, and many others painted by a Malaysian artist, an Eden-like idyll permeates the landscape with lush vegetation and content animals.

These evocative artworks have been created by Penang-based artist Jennifer Mourin, who says she has been inspired by seminal female artists such as Frida Kahlo. Mourin’s artworks routinely feature Mother Earth, or Gaia as she calls Nature after the ancient Greek goddess of Earth. In her paintings Gaia wears an ancient Egyptian ankh sign, a symbol of life and harmony, suggesting a utopian world where the natural world was given its due in our lives. “Just letting my inner voice and the issues that I find fascinating and that vex me, and channel it to come out in ink, colour, gauche and acrylic – I guess I found a trademark signature style,” she observed. 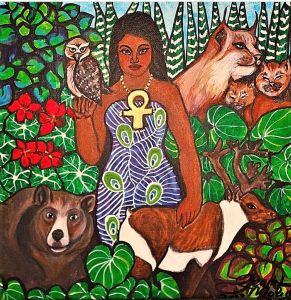 That style is imbued with a wholesome green consciousness. Mourin says she started painting environmentally themed works after learning about the dire state of the natural world in Malaysia and farther afield. “My ‘Mother Gaia’ series imbibes the need to take stock of what we are sacrificing in the name of greed, selfishness, over-consumption and so-called economic growth,” the Malaysian artist was quoted as saying.

“These new paintings assert the need to respect, protect and defend our planet and her progeny against abuse, exploitation, depletion and death,” she elucidated, referring to her latest series with Mother Gaia at its heart. “My personification of Mother Earth in the women I paint surrounded by the animals facing extinction stares people in the eye calling for people to change, for the killings to stop!”

Stop indeed they must! Malaysians are rightfully proud of their nation’s environmental bounty, yet many of the country’s iconic animals, from tigers to elephants to sun bears, have fallen on hard times as a result of relentless poaching and habitat loss. “I find it so bitterly ironic that this majestic animal [the tiger] is used as a symbol on the Malaysian coat of arms, is the name of our national football team (Harimau Malaysia), is revered as part of Malaysian identity, but the real-life animal is disappearing!” Mourin told Global Voices.

“The magnificent tiger is dying off because humans hunt, kill and trade in their skin, teeth, meat in some misguided belief that these will give people, especially men, power and sexual prowess– what sacrifice for such foolish vanity, arrogance and selfishness!” the artist lamented.

Art like hers can have a transformative power over how people see the world. Encouragingly, more and more Malaysian artists are turning to environmentally inspired themes in their art, thereby lending their voice to environmental activism. Another Penang-based artist, for instance, has been spearheading a project to bring attention to the destruction caused by slash-and-burn agriculture in Borneo and Sumatra. In Sabah, meanwhile, a group of punk rockers have taken the local art scene by storm with their conservationist message.

Here is hoping that more and more Malaysians will take heed of these artists’ message and come to embrace Mother Earth at long last. Gaia sustains us like a good mother, but she also needs us: we must become her responsible children and stop hurting her by cutting down forests, polluting the oceans and wantonly killing animals.