Don’t use Wild animals as Props for Selfies 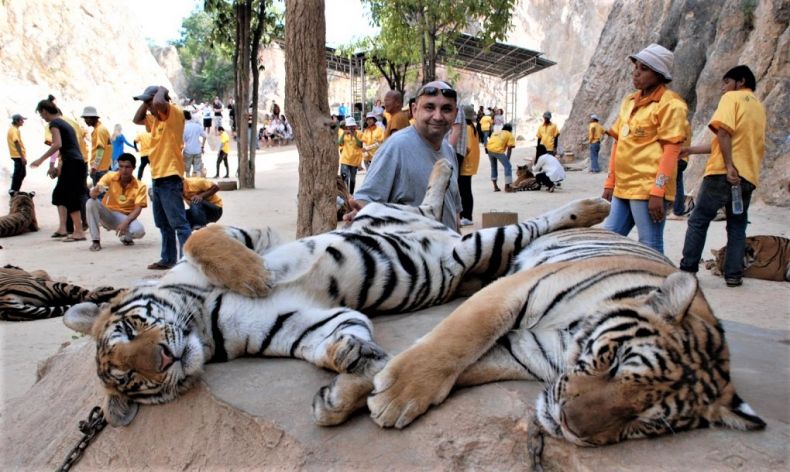 Tourists pose for pictures with captive tigers in Thailand's infamous Tiger Temple, which was recently closed down after years of complains by conservationists and animal welfare activists. Photo Credit: Facebook

Sadly, using exotic animals as props for selfies is a growing trend worldwide, according to the conservationist group World Animal Protection. Around much of the planet from Brazil to Thailand, endangered exotic animals are routinely used as props for selfies for tourists. Sloths, pygmy lorises, gibbons, hornbills and myriad other rare animals are employed by unscrupulous people who invite tourists to pose for pictures with these animals. The animals may sure look “cute,” but there is a dark world of exploitation behind this practice, World Animal Protection has found. 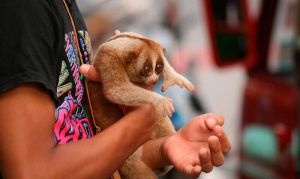 A slow loris is offered up as a selfie prop for tourists on the island of Phuket in Thailand. Photo Credit: Flickr

Their owners “beat them, starve them, and chain them so they can never escape,” the nonprofit explains about the causal abuse that is routinely meted out to these captive creatures. “Animals don’t perform tricks because they want to. First they are ‘broken’. Tortured. Traumatised. Your support could help rescue and rehome tortured animals, and stamp out this abuse, for good,” it adds.

Even if the animals were well treated, we might add, using them as props for selfies would still be wrong. Simply by being forced to endure being handled by untold numbers of random strangers day in and day out, captive animals are exposed to constant stress.

“It’s extremely distressing to see animals being stolen from the wild and used as photo props for posting on social media,”  Dr Neil D’Cruze, an adviser for World Animal Protection, told The Guardian. “The growing demand for harmful wildlife selfies is not only a serious animal welfare concern but also a conservation concern,” he added. “Our online review of this kind of practice in Latin America found that more than 20% of the species involved are threatened by extinction and more than 60% are protected by international law.”

Sadly, in Malaysia too the practice isn’t uncommon. So-called wildlife parks, zoos and other touristy places regularly have wild animals on site for tourists to take pictures with. Meanwhile, on beaches and other popular tourist destinations you can see locals hoping to make a quick buck by offering wild animals, from monkeys to snakes, for tourists so they can have their pictures taken with these hapless creatures. 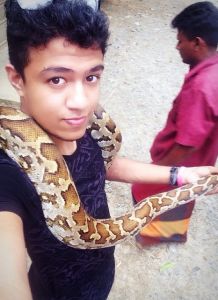 A man poses for a selfie with a python. Photo Credit: Instagram

Abroad too many Malaysian tourists help fuel the trade by frequenting places where wild animals are used as selfie props. In Thailand, for instance, the notorious Tiger Temple was recently closed down by officials after long years of allegations that the establishment’s staff neglected and casually abused the resident tigers. Before it was closed, however, the Buddhist monastery was making a killing by hosting hundreds of visitors each day from around the world, including Malaysia. Recently, the temple announced that it will reopen as a zoo, which means that yet more tigers will become playthings for tourists.

“The wildlife selfie craze is a worldwide phenomenon fuelled by tourists, many of whom are unaware of the abhorrent conditions and terrible treatment wild animals can endure to provide that special souvenir photo,” observes Steve McIvor, CEO of World Animal Protection. “Behind the scenes wild animals are being taken from their mothers as babies and secretly kept in filthy, cramped conditions or repeatedly baited with food, causing severe psychological trauma.”

So remember: by taking selfies with wild animals, no matter how “cute” they may look, you’re adding to their plight. So let us all stop doing it.