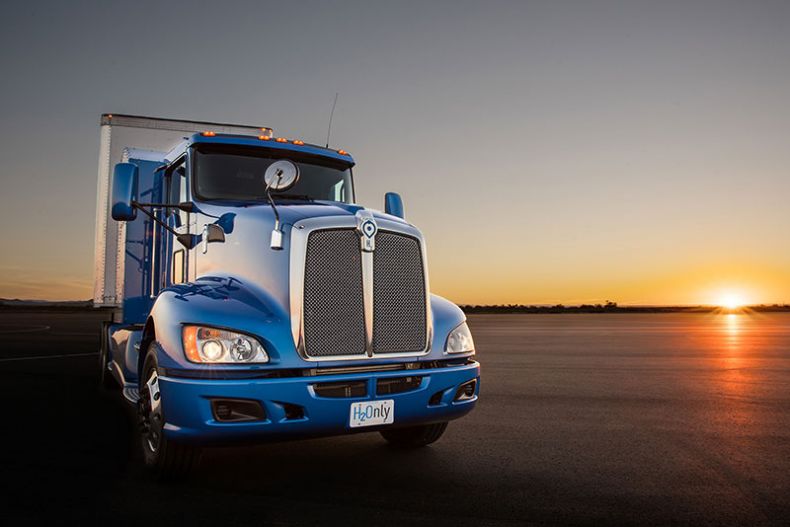 A concept truck by Toyota is powered by hydrogen fuel cells and emits nothing but water vapor. Photo Credit: Toyota

Vehicles powered by alternatives to fossil fuel are on the roll. Literally. The Japanese automaker Toyota is rolling out a new line of vehicles powered by hydrogen fuel cells. A concept version of a long-haul truck with the car manufacturer’s new hydrogen-based engine in it will set out with a full load of cargo from Los Angeles and make its way to Long Beach.

“If you see a big-rig driving around the Ports of Los Angeles and Long Beach that seems oddly quiet and quick, do not be alarmed! It’s just the future,” Toyota quips in a statement issued to the press. The trial is part of the Japanese company’s feasibility studies for its brand-new “Project Portal” – a hydrogen fuel cell system designed for heavy-duty trucks. Toyota touts its Project Portal as the next step in its development of zero-emission fuel cell technology for industrial uses. 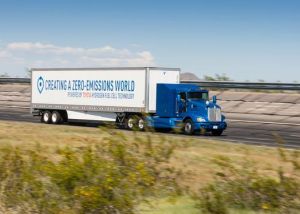 “[The trial’s] localized, frequent route patterns are designed to test the demanding drayage duty-cycle capabilities of the fuel cell system while capturing real world performance data,” Toyota explains  of its upcoming test runs. “As the study progresses, longer haul routes will be introduced.”

Toyota’s heavy-duty concept truck boasts a beast of an engine with more than 670 horsepower and 1,325 pound feet of torque thanks to a pair of Mirai fuel cell stacks and a relatively small 12kWh battery. The truck’s gross weight capacity is over 36,000kg while its projected driving range is more than 320km per fill under normal drayage conditions.

Comparable long-haul trucks, if powered by gasoline, emit plenty of CO2. Not this new one, though. “The zero-emission class 8 truck proof of concept has completed more than 4,000 successful development miles, while progressively pulling drayage rated cargo weight, and emitting nothing but water vapor,” the company explains.

You’ve read that right: the truck will emit water vapor and nothing else. This means that the technology, once it is put into use on a wider scale, can help us reduce our CO2 emissions in an effort to mitigate the effects of climate change.