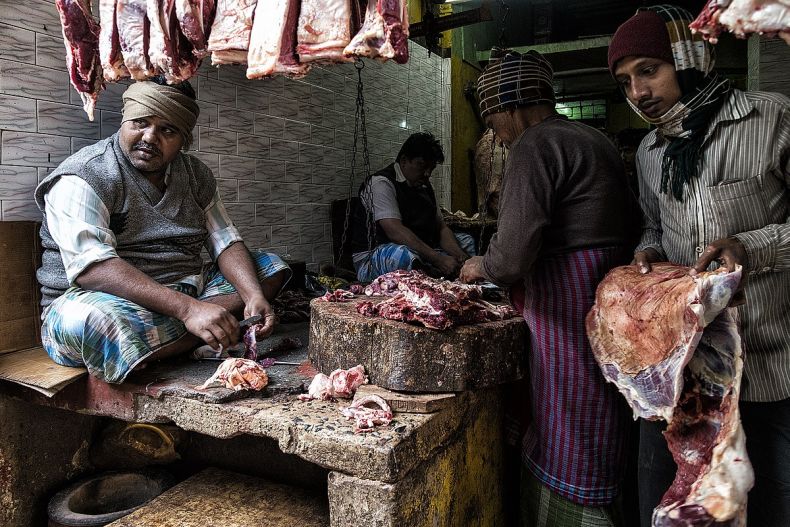 It's bad enough that we eat meat. It's much worse that some people continue to have a taste for the meat of endangered animals. Photo Credit: Wikimedia Commons

Some people see no difference between consuming chicken meat or the meat of protected animals like pangolins. Others positively seek the gastronomic thrill, as they see it, of consuming the meat of rare and “exotic” animals. One can make the argument, as many people have duly done, that ethically speaking there is no difference between eating beef or chicken and eating sambar deer or pangolin. This is because, it is argued, you have to kill an animal to eat its meat, and that’s wrong. But it is no more wrong to kill one kind of animal than another.

Is that true? Only in the abstract. It is undeniable that killing animals can rightfully be seen as an immoral act. Yet it isn’t just concepts of morality that come into play with the issue of bushmeat. Utility does too. Killing wild animals for their meat is not just wrong because killing in itself is wrong. It is also wrong because by killing rare and endangered species we jeopardize the very existence and continued survival of those species, as well other species that depend on them in intricately balanced ecosystems.

We breed chickens and cows for their meat (make of that practice what you will), which means that there is, there has been and there always will be an unlimited supply of chickens and cows. The same cannot be said of wild species like pangolins. Yet over the past decade alone an estimated one million pangolins have been slaughtered for their meat, which is prized by many people as a rare delicacy, as well as for their scales, which are used in traditional Chinese medicine. Unless the slaughter stops, pangolins will likely go extinct in the wild in the near future throughout their range from Africa to Southeast Asia.

And pangolins are hardly the only wild animals that are eaten by people: myriad other species are too. And sadly those people include quite a few Malaysians. Need proof? Here it is: According to a news report in the Borneo Post, some visitors to a weekend market in Miri, Sarawak, were recently shocked to see that the meat of wild animals was being openly barbecued for sale.

One of these visitors reported seeing a pair of civet cats being barbecued with the meat of an anteater also on offer. Live baby monkeys were on sale too for a mere RM300 each, presumably to be kept as pets. “My husband and I were surprised to see these animals being sold in the market without the authorities taking any sort of action,” the woman was quoted as telling the newspaper. “These are protected species and without proper monitoring, there might not be any left in the future.” 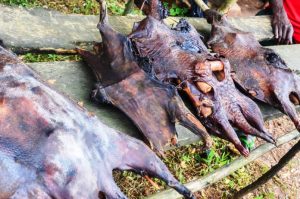 Bushmeat on sale looks enticing to people who consider it a delicacy, but the trade comes at a heavy price to wildlife. Photo Credit: Flickr

You can say that again. The poaching of wild animals for their meat and the sale of bushmeat, often in full view of tourists, have long bedeviled conservation efforts in Sabah and Sarawak. In a disturbing development, recently some tour operators have even started offering private bushmeat dinners for foreign tourists in Sabah. The dinners are held clandestinely in private homes with meals made from pangolins, wild boar, pythons, soft-shelled turtles and other “exotic” creatures. All these animals are poached from local forests and served “fresh” for clients.

Wan Junaidi Tuanku Jaafar, minister of Minister of Natural Resources and Environment, has placed the blame on this sad state of affairs in Borneo on local law enforcement officials who he said were not doing enough to combat the scourge of wildlife trafficking. Yet locals themselves were, too, at fault, he added. “The lacklustre enforcement and insufficient resources to enforce reflect the people’s general attitude, understanding and concern for conservation and extinction of animal species,” the minister said. “If we did then our awareness campaign is not reaching the target groups, especially rural dwellers who for generations understood that wild animals are fair game – for food and for sale.”

Sadly, however, the problem isn’t limited only to Borneo. “The consumption of [the] meat of protected wildlife is all too common throughout Malaysia,” notes Elizabeth John, a senior communications officer for the anti-poaching watchdog TRAFFIC. “Hopefully, monitoring and enforcement will improve once Sarawak’s new wildlife department has been set up,” she explains. “TRAFFIC would also like to encourage more people to follow [the example of the alert visitor cited above] and report such instances of exotic meat trade. They can do so directly to the authorities or via the Wildlife Witness App.”

The authorities must step up their efforts to clamp down on the sale of bushmeat in Miri and elsewhere in Malaysian Borneo. Yet we must recognize that there is only so much officials can do. They cannot be everywhere all the time. That is why ordinary Malaysian should and could do their part in helping out. They can be the eyes and ears of officials and conservationists. If you see something, say something. Together we can eradicate this awful practice once and for all.