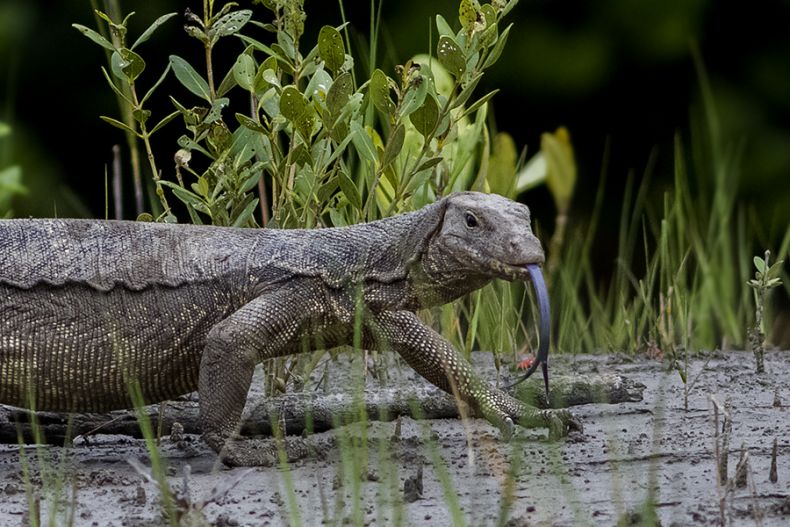 Malayan water monitor lizards may have adapted well to the ecological wasteland of oil palm plantations, but in the end they, too, may be doomed. Photo Credit: Wikimedia Commons

Across vast stretches of Borneo lush rainforests have been felled for timber and land. In their place have sprouted endless stretches of oil palm plantations. In Sabah, a mere fifth of the state is now covered in forests. The area’s storied biodiversity has suffered greatly as a result with numerous endemic species being pushed ever closer to the edge of extinction.

Yet even as some species have suffered, others have thrived. Rodents like rats are proliferating at plantations and logged forests where the newcomers pose grave threats to small mammals with which they end up sharing the same underbrush habitats. So, it turns out, are water monitor lizards.

Joshua P. Twining, a researcher specializing in altered ecosystems at Queen’s University in Belfast, set out to investigate how local communities of scavengers are adapting to the ecological wastelands of oil palm plantations in Sabah. “Colleagues and I designed and made our own baited traps and set them up various different sites along rivers within the Stability of Altered Forest Ecosystems (SAFE) project,” Twining explains in an article he wrote. “Some traps were in virgin jungle, others were in logged forest of varying levels of disturbance and some were among oil palm.” 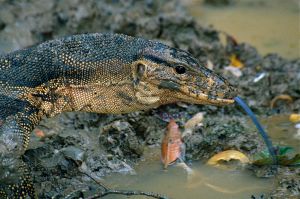 As a result, the researcher, who has published his findings in an academic journal, came to a conclusion. “There was a consistent trend: the more disturbed the land, the more water monitors we found, while their numbers decreased as we moved away from plantations into untouched forests,” he observes.

“In fact,” he adds, “the Malay civet was the only native mammal recorded alongside water monitors in oil palm at all, and even this species preferred higher quality forest sites.”

Malayan water monitor lizards (Varanus salvator) are highly adaptive creatures. They are ubiquitous from mangrove forests to city parks across Malaysia. They are opportunistic scavengers that feed on everything from dead fish to live birds and from frogs to street cats. They aren’t picky and will eat almost anything.

This is “what enables water monitors to survive in the wasteland of oil palm [plantations],” Twining explains. “In the natural forests that surround the plantations, they face competition from mammal scavengers and predators such as sun bears, otters, civets and mongooses. There, water monitors are found only in relatively low numbers and at significantly smaller sizes.”

Not so on the plantations, however. In the inhospitable monoculture of oil palm plantations the giant lizards have come to dominate. Yet not all is well in such degraded environments. “The increased parasite load that come from living at high densities reduces overall fitness of individuals, and in addition to energetic costs to adults, increased densities of a species that cannibalises juveniles of the same species, greatly deduces the chance of young making it to adulthood,” the researcher notes.

“For now, these giant lizards appear healthy,” Twining elucidates. “Of Borneo’s large native scavengers, they are the only species that has successfully adapted to the plantations. But, in the long run, due to the culmination of adverse effects, water monitors may be doomed to the same fate as the bears and other mammals that once inhabited the space now dominated by oil palm.”

In other words, oil palm plantations are bad news even for the rare species like water monitor lizards that have managed to adapt to them.