Planting Trees to save Malayan Tigers 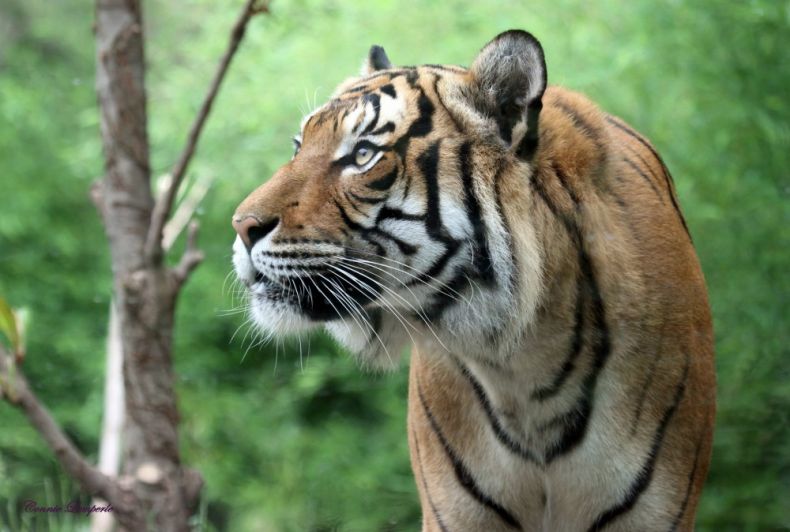 One hundred newly planted saplings may not seem like all that many, yet these new saplings could now serve a vital function in helping save Malaysia’s last few wild tigers. That is because the saplings were planted at a strategic location in Puncak Botak within Pahang’s Sungai Yu Tiger Corridor.

Such clearings are stark reminders that illegal logging has been making inroads into the area, which serves as a key wildlife corridor for Malayan  tigers. Owing to relentless habitat loss and poaching, the population of Malayan tigers in the country’s forests has shrunk to less than 350. With their numbers now at a historic low, the nation’s emblematic predators continue to face grave existential threats in the wild. The wildlife corridor is meant to aid them in the striped predators’ freedom of movement as they roam adjacent forests in search of mates and prey animals.

“Straddling over the corridor are the three eco-viaducts of the Central Spine Road or the Kuala Krai–Kuala Pilah Highway,” MYCAT explains. “Despite government foresight in building the green infrastructure, the forest surrounding the viaducts [has] become sparse and [is] unable to support wildlife due to poaching and illegal forest clearing,” the nonprofit elucidates. “The corridor is the last linkage between Malaysia’s largest tiger landscapes — the main range and greater Taman Negara.”

Puncak Botak lies next to the world’s longest viaduct built for wild tigers at the heart of the corridor. Nearby, illegal rubber plantations have sprouted up, increasing the risk of illegal logging and poaching. “Illegal felling and mining continue to threaten the corridor,” says Suzalinur Manja Bidin, program manager for civil society group Citizen Action for Tigers (CAT). “We support the Pahang state’s decision to eventually gazette Puncak Botak as a forest reserve and hope that this will come into effect sooner than later.”

So as to keep poachers at bay, hundreds of CAT volunteers continue to patrol the corridor on behalf of MYCAT on so-called CAT walks. MYCAT wants to see 52 hectares of degraded forest restored at the Sungai Yu watershed as part of the National Tiger Conservation Action Plan and Central Forest Spine master plan. “It is extremely encouraging to note that the Lipis forestry and land offices took the initiative to reforest Puncak Botak,” says Dr. Kae Kawanishi, tiger biologist who is MYCAT’s general manager. “With support from the government and members of the public, we are determined to restore the tiger population and forest at the Sungai Yu corridor.”