Coal is one of the most commonly used fossil fuels across much of the world, yet it’s also one of the most pernicious. Coal-fuelled power plants release plenty of CO2, thereby worsening climate change, while the burning of coal is also responsible for horrendous air pollution. A typical coal plant releases 3.5 million tons of CO2 per year. In the United States alone, coal plants spew a whopping 1.7 billion tons of CO2 into the atmosphere in a single year.

But here comes good news: researchers at the National Resources Research Institute at the University of Minnesota Duluth have devised a type of solid biofuel, which boasts the high energy efficiency of coal but without the polluting side-effects. Better yet: it can be made from agricultural waste, which means it could serve as a clean and green energy source for powering our homes and offices. 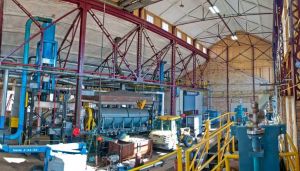 The US lab is already producing up to 6 tons of the biofuel. Photo Credit: Natural Resources Research Institute

The burning of this coal-like biofuel comes without heavy metal pollutants and with reduced sulfur levels. “As an added benefit, the biomass feedstock can be invasive plants, woody and agricultural waste, secondary wood species, and beetle-killed wood resources,” the researchers explain, adding the envision this biofuel “to be a supplement to fossil coal that helps reduce harmful coal emissions … at existing power and industrial plants.”

As an added benefit, the new type of solid biofuel can be produced within a few short hours. “If you think about how Mother Nature made fossil coal, it’s time, pressure and heat,” a member of the research team, Tim Hagen, explains. “We’re doing those same processes, but instead of millions of years, we’re doing it in a few hours. And because minerals don’t get into the mix, we don’t have those potential pollutants.”

The team of researchers already had a trial run of their “instant coal” biofuel at a electric plant Portland, where. they replaced fossil coal with 3,500 tons of biofuel, which required only a few minor tweaks with the mechanics. The biofuel preformed amazingly well and will thus be suitable for use on a commercial scale sometime soon. The research center’s lab is already producing up to 6 tons of the biofuel.

The solid briquettes of biofuel are manufactured in a way similar to roasting coffee in a process known as torrefaction: raw biomass is dried and heated up to 249°C in a low-oxygen atmosphere. It is then compressed. “Maybe you like light roast coffee, it’s not as concentrated… or you can take it further and have a dark roast coffee. We can do the same thing here,” one of the researchers explains. The biofuel can also be produced in another process known as hydrothermal carbonization.