Bearing Witness at the Epicenter of Forest Fires 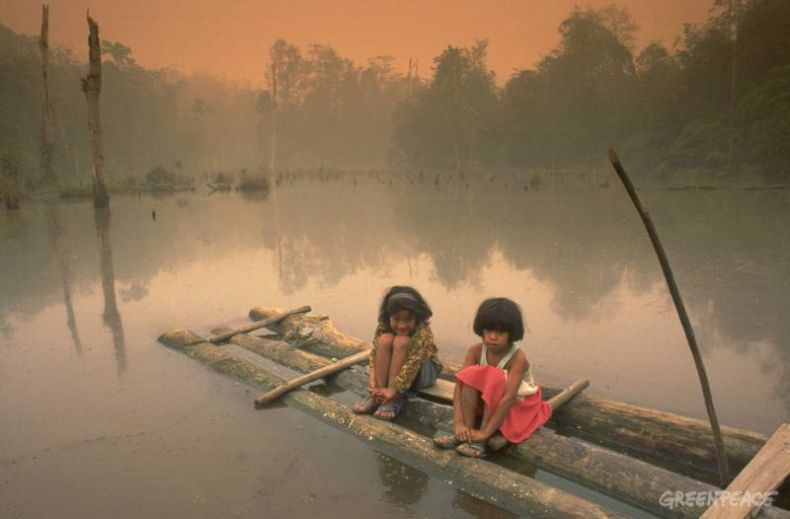 Malaysians are all too familiar with the periodic haze from slash-and-burning cultivation, which regularly ends up covering much of the country in noxious fumes for days and weeks on end.

Beyond the obvious health effects, the haze exudes an air of inconvenience. Traffic often grinds to a standstill in affected areas and schools may have to close, as it happened in 2015 during a particularly bad bout of haze. Many citizens are forced to stay indoors for prolonged periods, which deprives them of freedom of movement, even as household electricity bills grow and grow with the Air Pollutant Index (API) nearing “very unhealthy” or “hazardous” levels.

But people in parts of Indonesia that are ground zero for the haze as a result of illegal forest clearing and peat burnings by palm oil and pulp companies have it even worse. Much worse. Locals in West Kalimantan, for instance, face severely detrimental effects to their health because they are forced to inhale the toxic airborne byproducts of forest and peat burning. 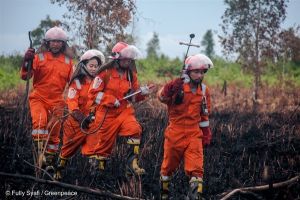 The local volunteers of a Forest Fire Prevention Team in Kalimantan are working to save their environment. Photo Credit: Greenpeace

Greenpeace is working closely with people on the ground in order to curb forest fires in Indonesia and elsewhere across Southeast Asia. Among other measures, a Forest Fire Prevention Team has been deployed in West Kalimantan. Made up mainly of young locals who have volunteered to put out fires, team members receive professional training from Greenpeace personnel, local firefighters and other field experts.

Nur Sakeenah Binti Omar, a young Malaysian dedicated to environmentalist causes, decided to join them. As an active Greenpeace Malaysia volunteer, she is passionate about protecting the environment. Two months ago Nur Sakeenah was deployed to “bear witness” to the environmental atrocities that take place in Ketapang, West Kalimantan. What she saw there constitutes “a serious cause for alarm,” she says.

“I recently journeyed to Ketapang, in West Kalimantan, Indonesia, to see the Greenpeace Tim Cegah Api (TCA), or the Forest Fire Prevention Team, in action. Why? Because I wanted to see how forest fires happen and how it can be prevented,” Nur Sakeenah recalls. “I also wanted to meet the individuals and groups putting their lives at risk to save Southeast Asia’s fragile forests and the wildlife that inhabit it.” 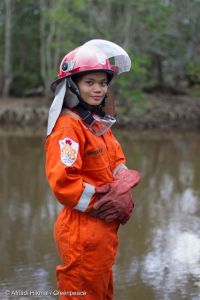 The special team she joined was composed of seven local men and four women who share a strong desire to save their forests. “I stayed with the ladies and got to know all of them during my 8-day trip,” the Greenpeace volunteer adds.

Locals like them who live in nearby areas where the fires tend to develop have seen their basic right to a safe and healthy environment taken away against their will. For the Forest Fire Prevention Team in Ketapang, the problem of forest clearing is highly personal. Their loved ones are affected regardless of their age, gender, background, religion or race. Forest fires do not discriminate.

As a witness to the massive damage done to forests and the health and livelihoods of local people, Nur Sakeenah not only saw but also felt firsthand the impact of being on the forefront of a regional and global issue. But she was also moved by the heroism of local volunteers who set about putting out fires started by others, often risking their health and life in the process.

“I could only admire their bravery and the sacrifice they’ve done to ensure a better future for their families and communities,” Nur Sakeenah explains. “These girls are so inspiring, they make you want to be better and do more for people and the environment.”

Nur Sakeenah is working on a campaign hand in hand with Greenpeace to spread awareness of the problem by sharing her experiences with other Malaysians. “Let’s continue to support them and Tim Cegah Api in their brave endeavors,” she stresses. “Don’t you think we need more of them in this world? Don’t you want to be just like them?”