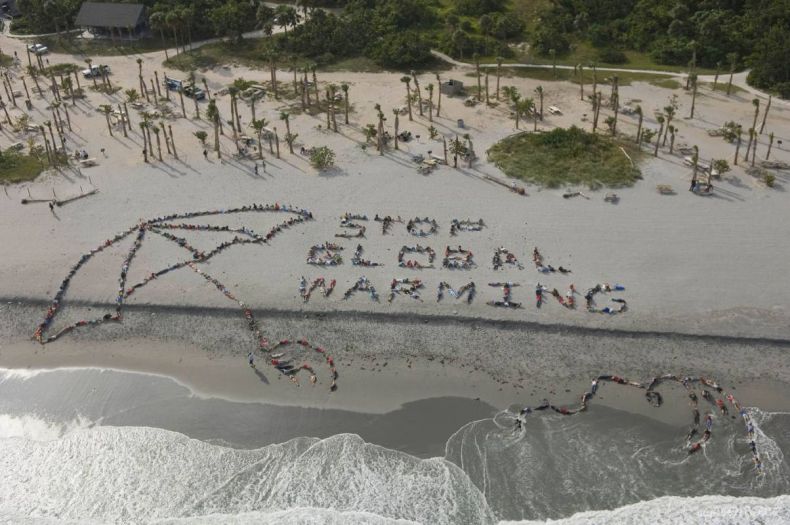 To reduce the world's collective carbon footprint meaningfully, oil, gas and coal companies must be held accountable for their actions. Photo Credit: Greenpeace

The world’s first ever national inquiry into the responsibility of the fossil fuel industry for its negative impacts on human rights resulting from climate change is taking place today in the Philippines, just a single day after Human Rights Day on December 10.

Leading oil companies, including ExxonMobil, Shell, BP, Chevron, ConocoPhillips, Suncor and Repsol, are being asked to explain their role in making climate change worse. The investigating body, the Commission on Human Rights of the Philippines, has sent notices in October requesting these companies to attend today’s meeting to discuss how evidence will be submitted and witnesses called. 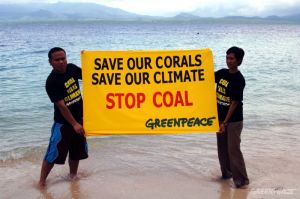 Two locals in Indonesia protest the use of coal. Photo Credit: Greenpeace

The investigation will intensify next year and has the potential of shifting the global understanding of corporate responsibility for climate change.

“Many homes were destroyed during typhoon Yolanda and people died, including some I knew,” said Isagani Serrano, president of the Philippine Rural Reconstruction Movement (PRRM), an organization that provides support in the aftermath of disasters and one of the petitioners. “We hope the CEOs of these companies look deep within their hearts and see how their profit harms people and the planet.”

Filipino typhoon survivors, other communities suffering from the impacts of climate change, and civil society groups, including Greenpeace Southeast Asia (Philippines), have asked the commission to investigate two years after super-typhoon Yolanda (Haiyan) claimed the lives of more than 6,300 people and affected the lives of millions of others in the country.

“International Human Rights Day should remind these companies why it’s important that they participate in the national inquiry. Extreme weather fuelled by climate change is making life worse for people on the frontlines of climate change,” said Yeb Saño, executive director of Greenpeace Southeast Asia, who is also a petitioner in the investigation.

“Their basic rights to food, water, shelter, health, and even life are under threat. People have rights, states have duties, and companies have responsibilities to respect these rights,” he stressed. “No oil, gas, or coal company has a right to pollute the climate, and those that undermine, threaten, and violate human rights must be held accountable.”

The national inquiry in the Philippines is one of several people-powered legal actions taking place around the world. From Norwegian climate change activists to American school students and from Swiss burghers to Peruvian farmers, more and more are seeking to take legal action to try and protect the planet from those who would harm it for the sake of making money.