Plants are Made to Act as Lamps 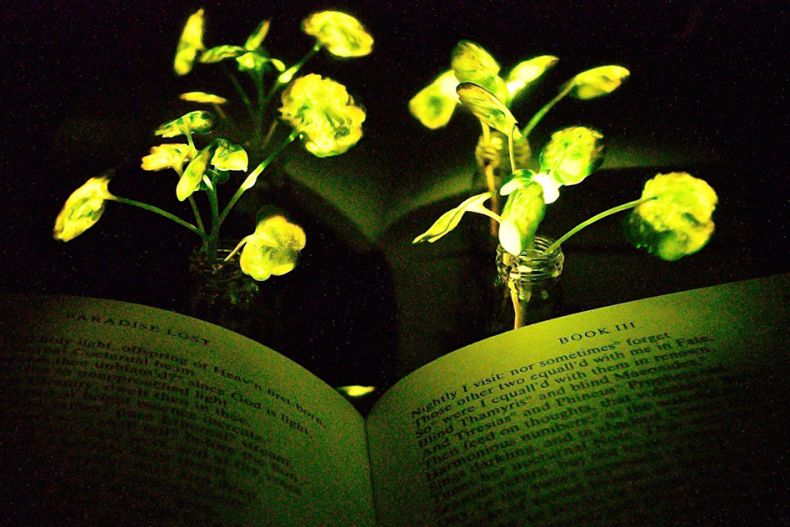 A book is illuminated in the dark by nanobionic light-emitting watercress plants at an MIT lab. Photo Credit: Seon-Yeong Kwak via MIT News

A team of researchers have done just that: create plants that can act as lamps at night.

Seon-Yeong Kwak, a Korean researcher in the US, and his team of engineers at the Massachusetts Institute of Technology have made a watercress that glows in the dark. They have published their research in a journal where they explain that living plants can be engineered to emit visible light for longer periods because they possess the capacity for independent energy generation and storage mechanisms.

To harness this potential in plants for light generation, the researchers have resorted to a field of science known as “plant nanobionics.” They have tweaked four chemically interacting nanoparticles, “including firefly luciferase conjugated silica (SNP-Luc), d-luciferin releasing poly(lactic-co-glycolic acid) (PLGA-LH2), coenzyme A functionalized chitosan (CS-CoA) and semiconductor nanocrystal phosphors for longer wavelength modulation.” 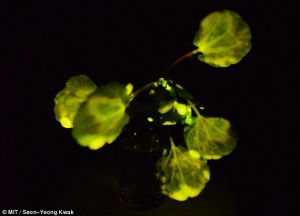 Glowing plants like this one could one day function as streetlamps. Photo Credit: MIT

By infusing a plant’s cells with specific nanoparticles, the plant can be made to perform a particular task. In this case that task is to produce light in the dark. To achieve that, the scientists saturated a liquid solution with nanoparticles that contain the enzyme luciferase and the molecule luciferin. Together, these chemicals are responsible for enabling fireflies and some jellyfish to glow in the dark through a process called bioluminescence.

Into this liquid solution they then submersed a watercress (Nasturtium officinale) whose tiny pores, known as stromata, on the underside of their leaves absorbed the nanoparticles.

The result has been amazing: the plant started producing light and, after some further tweaking, continued doing so for nearly four hours.

Admittedly, the light thus produced remains quite faint. It’s about half as bright as a commercial  1-microwatt LED, which means that we would need several hundred such modified watercress plants on a desk just so that we could comfortably read a book at night by their light.

But the scientists are working on solutions to boost plants’ light-emitting capacity. “Our target is to perform one treatment when the plant is a seedling or a mature plant, and have it last for the lifetime of the plant,” explains Michael Strano, a professor of Chemical Engineering at MIT who worked on the project. “Our work very seriously opens up the doorway to streetlamps that are nothing but treated trees, and to indirect lighting around homes,” he added.

They are hoping to develop a plant that can shut off its glow when it senses sunshine and turn it on only at night. Such modified plants could one day function as street lamps, reducing our dependence on electric lights.