Indonesia’s Pangolins are being driven Extinct at an Alarming Rate 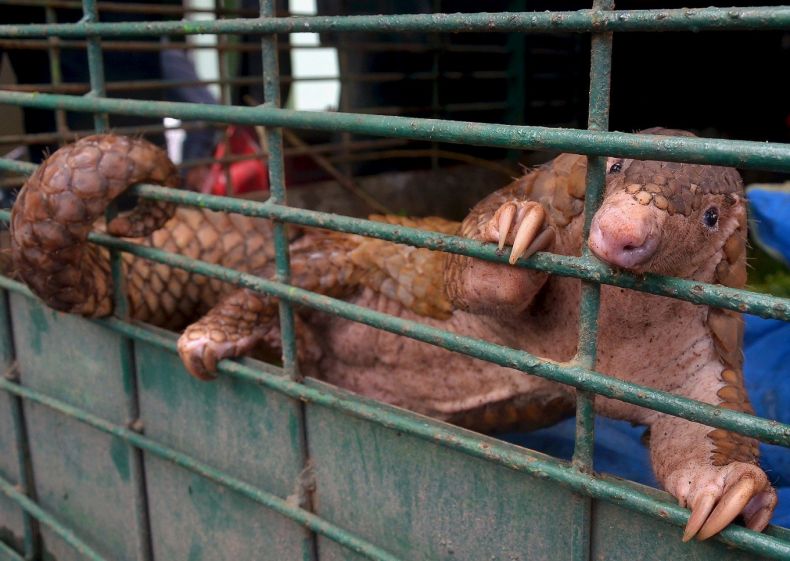 A Sunda pangolin, seized from traffickers in Indonesia, stares out of its cage. Photo CreditL AFP

More than 35,000. That’s how many Sunda pangolins are known to have been lost to poaching and wildlife trafficking within a few short years in neighboring Indonesia. Shocking? You bet. 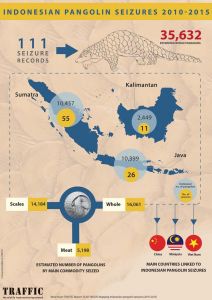 According to a new study by the wildlife-monitoring watchdog TRAFFIC, as many as 35,632 pangolins were seized in 111 enforcement cases between 2010 and 2015. More than four-fifths of those pangolins came from locally caught animals. Needless to say, thousand upon thousands of other pangolins may well have been smuggled out undetected, adding even more to the unrelenting death toll.

A hotspot of the illegal trade in pangolins and their parts (mostly scales and meat) has been Sumatra. The island has also served as a hub for trafficking pangolins into Malaysia, from where most of the mammals tend to be smuggled onto their intended final destinations in China and Vietnam, where their scales are believed by many to have curative properties.

“The volume of pangolins and parts seized annually varied greatly throughout the study period, ranging from an equivalent of 2,436 to 10,857 pangolins per year,” TRAFFIC explains. In one seizure alone 5.9 tons of pangolin meat and 790kg of scales were confiscated at an international cargo terminal in Medan, Sumatra. The haul, for which some 3,500 pangolins had been killed, was on its way to Vietnam.

The country’s critically endangered Sunda pangolins (Manis javanica) are facing the threat of going extinct in the wild within a few years unless their large-scale killing stops. “The Sunda Pangolin is Critically Endangered and therefore considered to be facing an extremely high risk of extinction in the wild — it simply cannot take this level of persecution,” said TRAFFIC’s Lalita Gomez, who was a co-author of the report.

“Indonesia’s wildlife is being drained on an industrial scale to feed the global illegal trade,” observes Kanitha Krishnasamy, acting regional director for TRAFFIC in Southeast Asia. “While the relatively high number of seizures speaks to Indonesia’s commitment in tackling the problem, it also highlights the relentless poaching.”

Sadly, the situation isn’t much better in Malaysia, either. Pangolins are critically endangered here too and remain at the mercy of poachers and traffickers despite efforts to protect them.