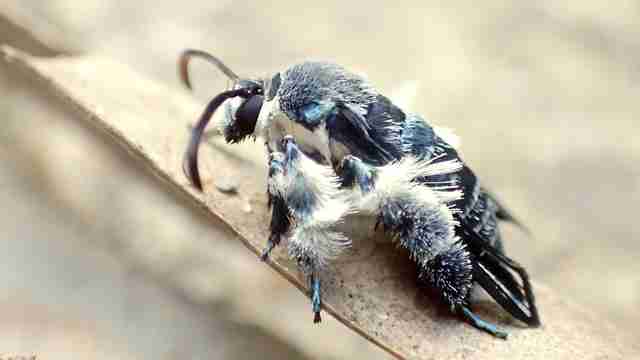 This oriental blue clearwing was seen at a lowland forest in Pahang for the first time in 130 years. Photo Credit: Marta A. Skowron Volponi

The oriental blue clearwing, a moth that looks and acts like a bee, was last seen in the 19th century and believed to have long gone extinct. It turns out, though, that the blue-and-white species of clearwing moth, known scientifically as Heterosphecia tawonoides, is alive and well in Malaysia.

The species was known only from a single specimen that was collected in neighboring Indonesia in 1887 and stored in a museum in Vienna, Austria. Until now, that is.

A Polish entomologist recently rediscovered the species in Malaysia on the banks of a river within a lowland rainforest at the Taman Negara National Park in Pahang. Marta A. Skowron Volponi, a PhD student at the University of Gdansk in Poland, made three field trips to the area with her filmmaker husband between 2013 and 2017. On the banks of a local river she spotted several oriental blue clearwings as they were “mud-puddling” – that is to say, collecting salts and minerals from rocks in damp areas with their tongue-like proboscises. In all, the couple saw 12 specimens in the wild. 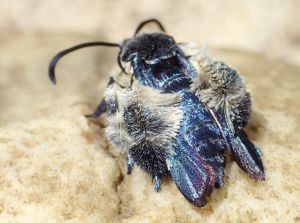 The moth flits from rock to rock to lick sodium and other minerals. Photo Credit: Marta A. Skowron Volponi

“You think about moths and you envision a grey, hairy insect that is attracted to light,” said the scientists, who is a co-founder of the ClearWing Foundation for Biodiversity and has published her findings in the journal Tropical Conservation Science. “But this species,” she stressed, “is dramatically different – it is beautiful, shiny blue in sunlight and it comes out during the day; and it is a master of disguise, mimicking bees on multiple levels and even hanging out with them.”

The oriental blue clearwing, which is a mere 2cm long, belongs to a family of clearwing moths that mimic bees in their appearance so as to ward off predators by fooling them into thinking they are dealing with bees. The moths have furry bodies, bee-like legs and narrow transparent wings, with which they even make a buzzing sound in flight.

The moths inhabit riversides in protected primary rainforests that are also home to Asian elephants, Malayan sun bears and other endangered species. “While people at first may not think that a sandy bank of a river is a diverse habitat, the reality is that this is precious real estate for clearwing moths, bees, and wonderful day-flying butterflies that are often endangered,” the researcher explained. “Once those riverbanks vanish, so too will all of these species, including my favorites, the clearwing moths.”

Sadly, the rare moths’ forest homes remain under threat from logging and continued human encroachment. Malaysia has one of the world’s highest deforestation rates. Between 2000 and 2014, an estimated 14.4% of forests around the country were decimated even as palm oil plantations doubled in size. “These highly vulnerable ecosystems are vanishing rapidly,” Skowron Volponi has warned.