Are we seeing the Last of Malaysia’s Rhinos? 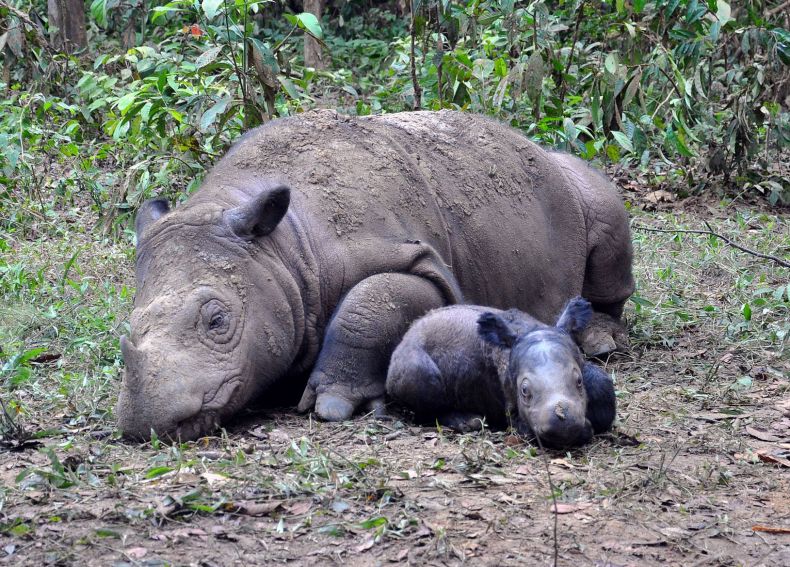 Malaysia has only two Sumatran rhinos left and both of them, a male and a female, are in captivity. It’s no surprise then that when Iman, the female, fell seriously ill recently her keepers became exceedingly concerned. Not long ago Puntung, another female rhino, had to be put down after a bout with skin cancer in Malaysia, reducing the country’s population of native rhinos from three to just two.

Thanks to round-the-clock care, Iman has started to improve, albeit she has not fully recovered and will likely require close attention for some time to come. Then again, both surviving rhinos will require close attention for the rest of their lives. With Sumatran rhinos declared extinct in the wild in Malaysia in 2015, the country’s only hope now lies in trying to bring the species back from extinction via an artificial breeding program overseen by the conservationist group Borneo Rhino Alliance and the Sabah Wildlife Department. 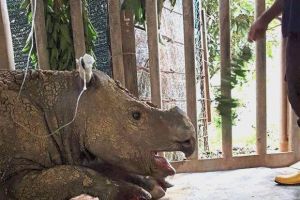 Such programs have not been without their critics. These critics tend to argue that we should let nature take its course and that rather than try to “resurrect” critically endangered species in the lab artificially we should save them in the wild in the first place while there is still time.

The problem with this argument, of course, is that for species like the Sumatran rhino, of which as few as 50 may still be left in in the wild in neighboring Indonesia, that time has already run out. So we are left with the tools of modern cutting-edge science to try and right the wrongs we have done to species like rhinos by poaching them mercilessly into near-extinction.

“[A]dvances in animal cell and molecular biology are proceeding at a rapid pace,” explains Sabah Wildlife Department director Augustine Tuuga, who helps oversees a captive-breeding project in Sabah that seeks to create new offspring from the eggs and sperm of Malaysia’s last two rhinos, as well as the DNA of two other now-dead rhinos, like Puntung.

“[I]t has become possible to create sperm and eggs of mammals from the skin cells of the relevant species,” the wildlife expert elucidates. “If this had been possible 20 years ago, we could be producing Sumatran rhino embryos in vitro and potentially implanting the embryos into surrogate mother rhinos in another country.”

Captive breeding programs have worked wonders with some previously critically endangered species like China’s giant pandas, which have successfully been brought back from the edge of extinction. To be sure, Malaysia’s experts are facing an uphill battle what with there having been so few Sumatran rhinos (a mere four) whose cells could be harvested for their genomes in the hopes of using their DNA in in-vitro fertilization. But not all has been lost yet.

“The genomes of all four of the last Sumatran rhinos in Malaysia are kept in living cell cultures both overseas and locally,” Tuuga notes. “Puntung, for example, the female who was euthanized in June 2017, is still ‘alive’ in cell culture in Malaysia,” he adds. “We are building up Malaysian expertise in other essential skills such as conducting safe general anaesthesia for large mammals, collection of semen and eggs, and in vitro fertilization.”

Malaysian experts may yet be able to pull off a historic feat and resurrect the country’s Sumatran rhinos. Fingers crossed that they will succeed.