Plastic Waste is a Threat to Sea Turtles 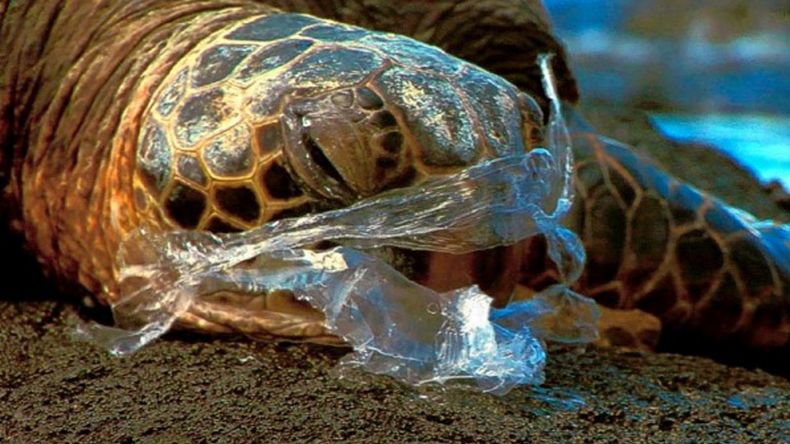 A hawksbill turtle lies on a beach with plastic wrapped around its mouth. Photo Credit: Flickr

Take sea turtles. Inadvertently turtles often consume bits and pieces of plastic, mistaking them for food. Floating pieces of plastic may appear as jellyfish, a favorite prey of some turtles. According to estimates, at least half of all sea turtles have already consumed plastic.

Once the reptiles ingest these pieces of plastic, they risk suffering potentially life-threating side-effects. Plastic bits can cause a blockage in their intestines until their insides explode, explains Casper van de Geer, a conservationist working for Local Ocean Conservation. “Or they are in such pain that they recognise that they have to stop eating and they basically starve.”

Unless the animals receive help, they often perish after suffering in agony for long periods. A reptile “can’t express pain like a mammal can in its face, but you can see that it’s just closing its eyes and its all sort of tensed up and all of a sudden ‘poof’, it all comes out,” the expert says.

Turtles can also get entangled in larger pieces of plastic waste, including discarded fishing nets, and drown or slowly die in other ways. Needless to say, most sea turtles, elusive and shy creatures as they are, never receive medical care if they are in trouble because they do their best to avoid all contact with humans. Often we only find their carcasses washed up on shore.

All this is extremely worrying. Most sea turtle populations are facing grave threats to their survival as a result of poaching and habitat loss. That they also face death from plastic waste makes matter much worse. And things are bound to get worse in coming years. There are already an estimated 5 trillion pieces of plastic trash in the world’s oceans and each year people around the planet dump another 9 million tons of plastic into the sea.

So what’s the solution? Simple: we must stop using plastic products whenever we can avoid doing so, especially disposable products like plastic bags and utensils. And we must stop dumping our plastic waste into the sea.