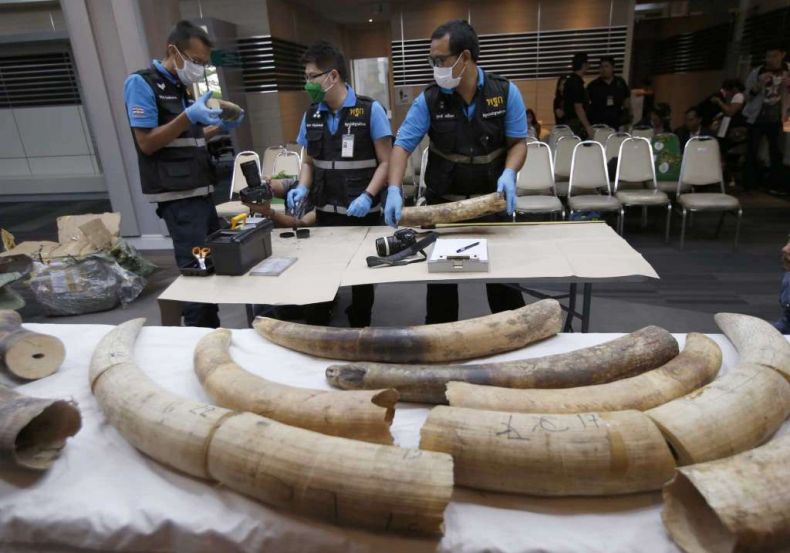 One hundred forty-eight kilograms. That’s how much African elephant tusks confiscated by customs officials at an international airport in Bangkok weighed.

The large haul of ivory, which is worth around 15 million Thai baht (RM1.9 million), was comprised of three large tusks and 31 tusk fragments. They had been flown in on an Ethiopian Airlines flight from Lagos, via Addis Ababa, in Nigeria and were on their way to China when the shipment was intercepted.

For poachers and lovers of ivory, elephants are worth far more dead than alive. Photo Credit: Environmental Investigation Agency

From what I can tell, these ivory tusks were taken from very big elephants, and elephants of that size are now hard to find even in Africa,” a Thai official was quoted as saying. “And judging from how the tusks look, they appear to have been taken a while ago. They weren’t hunted recently. They were taken and stored for a while before smugglers sent them out.”

And so it goes. Sadly, Southeast Asian countries, including Thailand and Malaysia, remain hubs for international wildlife trafficking syndicates who know no borders. Last year several large shipments of ivory were seized by both Malaysian and Thai customs officials, yet these syndicates clearly remain undeterred. Although China’s government has imposed a ban on the sale of ivory in the country, a thriving black market trade in the tusks of African and Asian elephants carries on.

Complicating matters is the cross-border nature of the highly lucrative illicit trade with traffickers resorting to various routes for their ill-gotten merchandise across the region. That is why increased vigilance and stepped-up international policing are essential if we are to roll back the appalling extent of wildlife trafficking.

“Wildlife crime is a big business,” explains the conservationist group World Wide Fund for Nature. “Run by dangerous international networks, wildlife and animal parts are trafficked much like illegal drugs and arms. By its very nature, it is almost impossible to obtain reliable figures for the value of illegal wildlife trade. Experts at TRAFFIC, the wildlife trade monitoring network, estimate that it runs into hundreds of millions of dollars.”