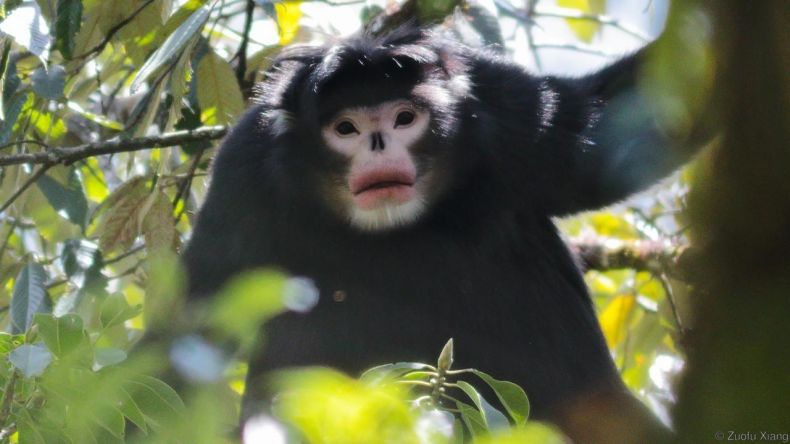 Snub-nosed monkeys are being brought back from the edge of extinction in their forests that are shared by Myanmar and China. Photo Credit: Zuofu Xiang

In 2010, scientists identified an as yet unknown species of snub-nosed monkey in Myanmar, the country formerly known as Burma. The then only known specimen of the newly identified species did not fare that well, though. It had been caught by local hunters in the mountainous state of Kachin and was promptly eaten.

Dubbed “snubby” by scientists thanks to its lack of a proper proboscis, the species (Rhinopithecus strykeri) was no sooner discovered than it was declared critically endangered. In 2011, other specimens of the species were discovered in the forests of Yunnan province in neighboring China, where the primates likewise faced the threats of poaching and habitat loss. 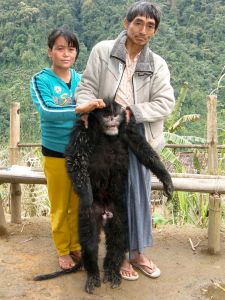 Locals in Myanmar’s Kachin state pose with the carcass of a critically endangered snub-nosed monkey in 2010. Photo Credit: Ngwe Lwin

The animals take after certain comic book characters with their front-facing nostrils and fleshy lips. Because of their exposed nasal cavity, the monkeys tend to sneeze in pouring rain, which can reveal them to prowling human hunters.

But here comes a bit of good news: the snub-nosed monkeys, albeit they remain critically endangered, have been saved from further depredations at the hands of humans.

“Intensive community-based conservation awareness work has reduced the local hunting pressure in Myanmar, while the implementation of a trans-boundary agreement between China and Myanmar, signed in 2015, has significantly reduced illegal trans-boundary wildlife trade and illegal logging,” it has been reported.

In addition, the Burmese and Chinese governments are working on establishing new protected areas on both sides of the border in order to save the primates in their natural habitat. “Protected area designation and trans-boundary collaboration, combined with the active participation of local communities in both biodiversity conservation and sustainable economic development, have substantially improved the chances for the snubby to be saved from the brink of extinction,” Frank Momberg, director of the nonprofit Fauna & Flora International’s Myanmar programme, has been quoted as saying.

What this case indicates is that when there is a will, there is a way. All endangered animals can still be saved given dedicated and concerted efforts, which should include effective government policies and intensive community engagement.