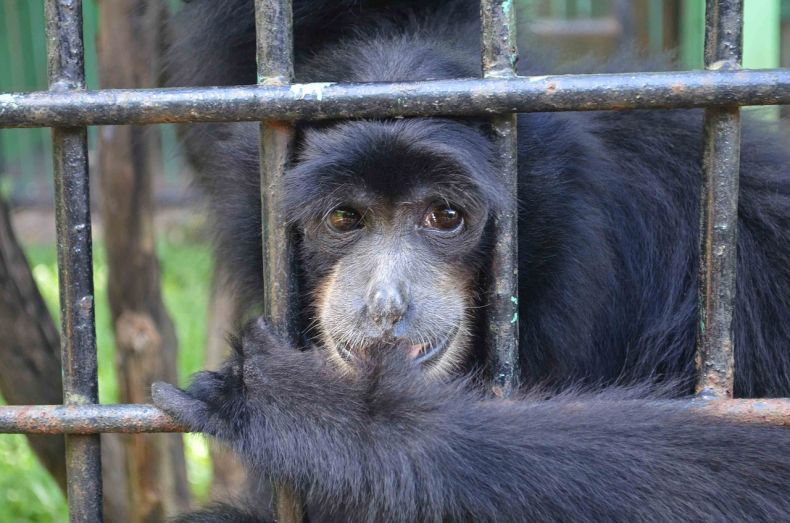 A monkey looks forlornly out of a cage in a zoo. Photo Credit: Max Pixel

Prominent Malaysian animal rights activists say that conditions at Kemaman Zoo in Terengganu are appalling. Members of the NGOs Malaysian Friends of the Animals and Friends of the Orangutans (Foto) have recently provided photographic evidence indicating that several resident animals, from orangutans to elephants, were being neglected and mistreated at the zoo.

Not so, retorted officials of the Department of Wildlife and National Parks (Perhilitan). Claims of animal abuse at Kemaman Zoo have been exaggerated and based on a “misunderstanding,” a senior wildlife official stressed.

Case closed then? Not according to animal rights activists.

The images and videos obtained of the animals, including those of a young elephant calf chained up in a muddy enclosure, are indicative of poor animal welfare at the zoo, activists stress. Officials said the elephant calf had been chained “to prevent it from wandering off from its enclosure [and] from posing a danger to the visitors and zoo staff.” 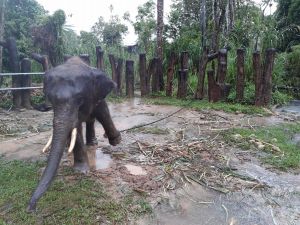 A baby elephant is chained up inside an enclosure in the zoo.

That explanation does not wash, however, notes Carol Buckley, a world-renowned elephant expert from the US. “From the design of the exhibit, it appears they mistakenly assumed the young male elephant would remain contained,” Buckley said in an interview with Foto, which has passed her comments on to Clean Malaysia.

“But the design is inferior, resulting in the elephant being chained. Poor planning is consistent with many zoos. The weaving [of the chained calf] is an indicator of poor welfare, [demonstrating] the elephant’s coping mechanism in response to stress,” she added, referring to a video that showed the young calf swaying from side to side with one of its legs held by a chain tied to a log.

Nor does a newly constructed elephant enclosure at the zoo appear adequate to house the zoo’s elephants in enough comfort. “The enclosure has components of a more modern facility but it is flawed from the start,” Buckley explains. “The floors are concrete, which can lead to foot disease. The stalls are stark and small. The yard is much too small for any group of elephants. I did not see an annex yard where elephants can be separated for introduction and in the event that they do not socialize well.”

The same concerns apply to the situation of the orangutans kept at the zoo, including an infant, observes Upreshpal Singh, director of Foto. “According to a Kemaman Council secretary the baby orangutan had to be separated from his mum due to medical reasons and that the mother tends to mate with her baby,” Singh tells Clean Malaysia. “However, no baby orangutan should be kept in such an atrocious tiny cage. We have been sent photos from November, December and January to show the baby kept in the same cage,” the animal rights activist explains. 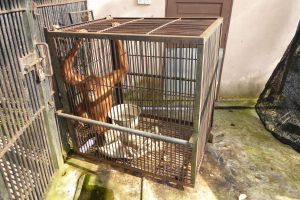 A baby orangutan languishes in a tiny cage at Kemaman Zoo in Terengganu.

“Providing orangutans with tyres, ropes and sacks is not sufficient,” Singh adds. “All zoos should provide orangutans with different enrichment daily to keep the apes physically and mentally active. The enclosure needs improvement to avoid the risk of drowning and this could be the reason why the orangutans are mostly seen on the concrete floors in cages.”

(There are indications on the zoo’s Facebook page that Boboy, the baby orangutan, may since have been moved from the cage and relocated, along with his mother, to a more spacious, leafy enclosure with aerial climbs.)

Other animal rights activists have been even more scathing in their condemnation of wildlife officials who, they say, have been turning a blind eye to violations to animal welfare at Kemaman Zoo and similar establishments across Malaysia. “Reports last week of the Wildlife Department finding nothing wrong with conditions animals are held in at the Kemaman Zoo only serve to reinforce the general perception these government officials always find in favour of zoos,” Sean Whyte, chief executive officer of the conservationist group Nature Alert, stresses in a letter to the editor apropos of the official denials.

“Whenever a complaint is made the Wildlife Department have always come to the defence of the zoo. The department sees nothing wrong, hears nothing, and does nothing,” posits Whyte, who has long been campaigning to ease the plight of resident animals at Malaysian zoos. “Pity the poor animals the department is prepared to leave suffering,” he adds. “The Wildlife Conservation Act may as well have been written in invisible ink. It is not enforced.”

Zoos in Malaysia, the animal rights activist insists, “are, with one or two exceptions, places of appalling cruelty” where “profits are always put before animal care.” 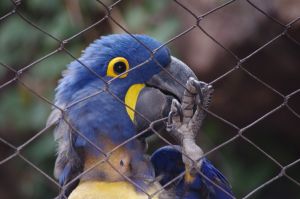 A caged parrot pecks at the wiremesh of its enclosure. Photo Credit: Max Pixel

That statement should hardly come as a surprise to anyone who has visited Malaysian zoos where the standards of animal welfare tend to remain demonstrably subpar by modern standards. As likely as not, you will see a myriad of animals cooped up in tiny dingy cages with few or little enrichment tools and fed on inadequate diets.

Majestic animals like orangutans, tigers, elephants and sun bears are often reduced to languishing in abject conditions for years on end without a reprieve. If zoos kept human beings in similar deprivation, they would be condemned as little better than maximum-security prisons that doubled as houses of horrors.

To make matters worse, highly social animals like elephants and primates are often kept singly for long periods, which is a form of solitary confinement for them. In the same vein, animals are often deprived of even the most basic opportunity to express their natural behaviors. “One example. How many birds are kept in cages that prevent them from flying?” Whyte offers. “Birds have wings, for flight. Depriving them of the ability to fly and experience natural stimulus is a breach of Malaysian law. How many zoos have their own veterinarians with experience in wild animals? It is a legal requirement,” he elucidates.

“Given that most zoos appear not to care about the cruelty their birds and animals suffer and [given] the Wildlife Department’s constant defence of bad zoos, if readers do not want to be complicit in this suffering, the very best and easiest thing to do is to stay away from all zoos,” Whyte surmises.

He counsels: “If you must visit a zoo, go to Singapore, where you will see a zoo of such quality that, after this visit, you will never, ever, want to visit a Malaysian zoo again.”