Chinese New Year is just around the corner and lots of Malaysians are gearing up for the days-long festivities. The festive spirit of New Year will pay homage to the idea of renewal, yet sadly some time-honored old practices are bound to persist across Malaysia.

Take the use of disposable plastic cups and utensils at public banquets and feasts. Extensive littering has long bedeviled festivals in Malaysia, adding to the voluminous amounts of plastic waste around the country. Celebrants can help do their bit to reduce the amounts of such waste by refusing to use deposable plastic items. 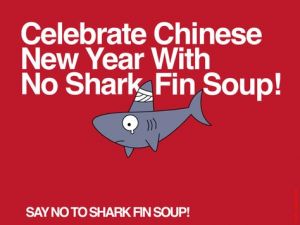 Then there is the issue of “status” dishes like shark fin soup. Sadly, many Malaysians continue to partake of “exotic dishes” like shark fin soup, thereby further endangering beleaguered sharks in the world’s oceans. “Despite the calls to ban shark fin soup globally, there are still places offering the dish,” stresses Iqbal Abdollah, a member of the nonprofit Malaysian Nature Society.

Educational campaigns, such as those organized by conservationist groups like WildAid and WWF, have come a long way in weaning Malaysians off shark fin soups. Numerous hotels and restaurants around the nation, too, have stopped serving the dish in order to help save the planet’s sharks. Yet all too many customers remain blissfully unaware that their penchant for shark fin soup has dire consequences for entire shark species and even marine ecosystems.

“There may be consumers who do not understand the importance to say no to shark fin in order to protect the sharks as the damage on the marine ecology if they were to disappear would be catastrophic,” Iqbal observes. “The consumers actually play a major role too. If there is demand, there will be supply,” he adds. “When the demand has stopped, the supply will be cut off too. Hence, it is time for us to play the major role by stop eating shark fin.”

It is high time indeed. Let’s all stop ordering shark fin soup once and for all until the dish will no longer be on offer anywhere in Malaysia.