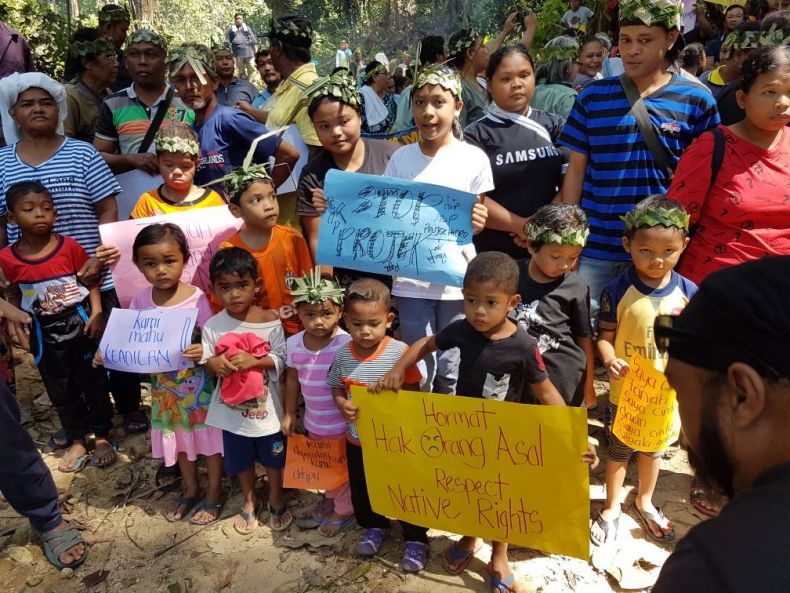 Orang Asli people in Gopeng, Perak, protest the building of a hydroelectric dam in their area. Photo Credit: Free River Campaign via Facebook

Hydroelectric dams look good on paper. They are far cleaner sources of energy than fossil fuel-powered plants, which is certainly a big plus. The trouble, though, is that the construction and operation of hydroelectric dams can deal massive damage to local ecosystems.

That is why Orang Asli activists calling themselves the Free River Campaign from the community of Kampung Ulu Geruntum in Gopeng, the state of Perak, are fiercely opposed to the planned construction of a small hydroelectric dam near their village. The project, they explain in a video they have posted on their Facebook page, is bound to have negative impacts on their lives and natural environment.

Nor have officials consulted with community leaders before they greenlit the project, activists say. “Even though we oppose the project, they are going ahead with it despite our protests,” one protest leader explains in the online video while standing among fellow protesters at a construction site for the dam. Members of the local indigenous community are concerned that the building of the dam on a nearby river will lead to the flooding of ancestral burial sites and the destruction of local forests.

The construction of the dam is leaving unsightly marks in the area’s environment. Photo Credit: Free River Campaign

Prominent Malaysian conservationists, including Pertubuhan Pelindung Khazanah Alam (PEKA) president Shariffa Sabrina Syed Akil, have expressed support for the villagers. “We have received a complaint from the Kampung Ulu Geruntum villagers over the project,” Shariffa Sabrina has been quoted as saying. “We are concerned that the project will affect those staying near there as their income, food and water sources depend on the river and forest,” she added. “The orang asli are also concerned that the mini hydro dam will cause flooding in the area.”

The dam, which is expected to begin operation in 2023, is part of the federal government’s move to increase the share of sustainable energy in Malaysia. Government officials stress that the dam in Gopeng, and others like it, will be needed to fulfill the country’s obligations, as set out in the Kyoto Protocol, to reduce its greenhouse gas emissions in a global effort to tackle climate change.

“The issue here is about the site,” Perak’s Mentri Besar Zambry Abd Kadi acknowledged. “The important thing is, it is subjected to regulations. The contractors can’t simply go in and clear.”

Hopefully that is indeed the case. Malaysia should build more dams to wean itself off fossil fuels, but not at places where the lives of local communities and the health of local environments are badly affected.