It was back to School for a Jumbo in Sabah. Not Everyone was Pleased A female pygmy elephant walks across the canteen in a school in Sabah. Photo Credit: YouTube

It’s many a wildlife-loving child’s dream: an elephant coming to school to enliven the daily tedium of classes. In one school in Sabah that dream came true on a recent morning when a wild elephant suddenly showed up in school and walked through the canteen.

Then again, the sight of a large wild animal can also cause panic and many students in SMK Telupid got a bit of a scare when a female elephant trespassed into their school in Telupid district. “This morning, an elephant went into the SMK Telupid canteen in search for food, shocking students and teachers,” a local police chief was quoted as saying.

A video of the elephant, captured on a mobile phone, shows the female elephant calmly walking across the front of the canteen, swinging its trunk leisurely. “There were no damages,” noted Dr Diana Ramirez, acting director of the Wildlife Rescue Unit. “The female elephant was calm and no injuries were reported.” 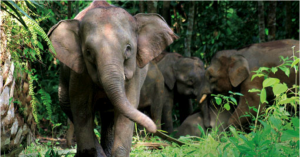 Pygmy elephants are placid creatures, by and large, but they can turn violent if they feel threatened. Photo Credit: Flickr

This incident has not been a one-off in the district recently. On February 28, a herd of 10 wild elephants trespassed into the premises of the Beluran police station, which lies around 5km away from the school, after they had demolished the fence around the station.

Meanwhile, four elephants from a herd of around 20 have also had to be relocated from the Telupid area by wildlife officials after they had been wading into local farms to feast on crops and acting aggressively towards villagers. “Two adult males and two adult females ― one with a baby ― were successfully caught after receiving reports from the villagers of aggressive behaviour of these elephants in their area,” Ramirez said. “We are still trying to capture more and get the herd away from humans,” she added.

Sadly, such incidents are bound to continue. The island of Borneo has been losing its once ubiquitous forest cover at alarming rates, leaving wild elephants with less and less roaming ground and less and less food in their natural habitats. Vast swathes of forest have been cut down over the past decades in one of the world’s highest rates of deforestation. An estimated 1.3 million hectares of forest is still lost to loggers and palm oil plantations each year.