Human-Tiger conflicts are on the Rise in Sumatra. The Reason: Habitat Loss 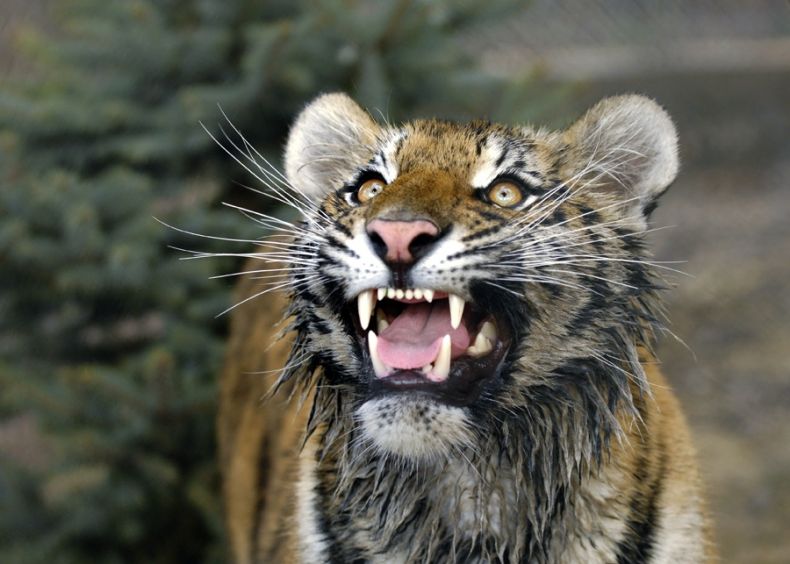 When cornered, tigers can turn deadly by lashing out. Photo Credit Flickr

Three construction workers were at work on a building site in the Indragiri Hilir district of the Sumatran province of Riau when they noticed a tiger lurking around. They decided to wait for the animal to leave, but when they thought it was safe to leave they chanced upon the predator, which mauled one of them to death.

Nor was this the first deadly attack by a tiger in the area. In January a female worker was mauled to death by a Sumatran tiger at a palm oil plantation some 20km away.

A week ago another attack by a Sumatran tiger ended in tragedy when a local was mauled to death in the village of Mandailing Natal in North Sumatra. Villagers, believing the wild tiger to be a shapeshifting evil spirit called a “siluman,” hunted the animal down and killed him.  They proceeded to disembowel the dead tiger before hanging his carcass up in a hut. 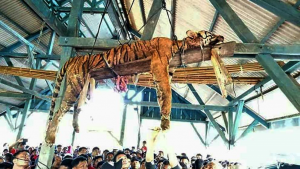 Indonesian villagers have strung up the body of a wild tiger they had just hunted down and killed. Photo Credit: Facebook

“The tiger was sleeping under a resident’s stilt house when the people struck him repeatedly in the abdomen with a spear,” a local official was quoted as saying.

Within the space of just a few weeks, three people and an endangered tiger have perished in Sumatra. Sadly, such deadly run-ins between critically endangered tigers and people are bound to increase in Sumatra. Sumatran tigers, of which a mere 400 or so remain in the wild, have lost much of their habitats to wanton forest clearing.

With little space left for them to go, many of the tigers can’t help but venture near human communities where they then may come upon people. Some of these encounters can turn deadly when the predators are either frightened or angered into lashing out. Rarely if ever do Sumatran tigers, which are the world’s smallest living tiger species, prey on people.

These deaths come just as the United Nations has called on the world’s nations with tiger rangers to protect the beleaguered predators, along with other big cats. Yet protecting them does not just mean not killing them when they show up in or near human settlements. It also means leaving their habitats intact so they can stay where they belong: in the wild.

“We can prevent the next wildlife tragedy — and save thousands of endangered species, like Sumatran tigers,” stresses Collin O’Mara, president and CEO of the US-based National Wildlife Federation. We can do that “by dedicating sufficient resources for collaborative habitat restoration, bolstering key protections and enforcement efforts, and engaging local communities and showing the economic benefits of conserving wildlife.”