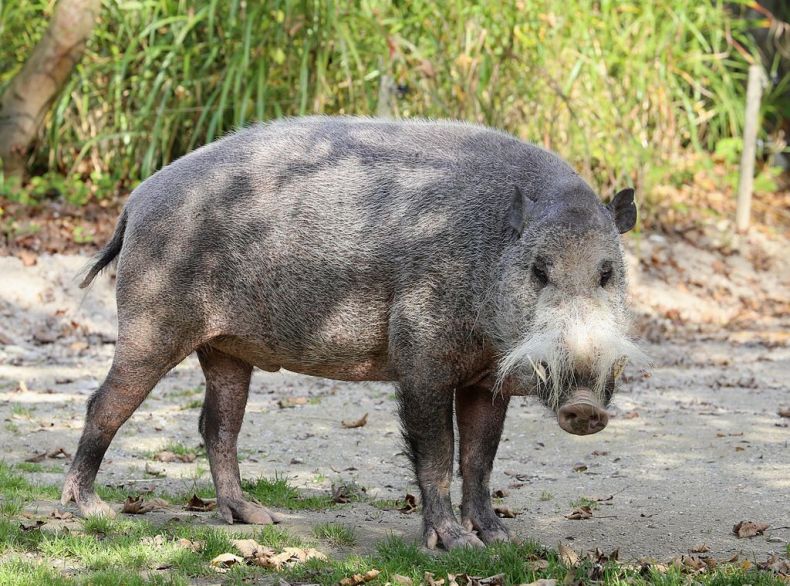 The endless stretches of palm oil plantations may please the eye of cultivators but they have been ecological disasters in Sabah. Across much of Malaysia plantations have replaced once thriving thick forests with monotonous ranks of cultivated palms where few wild species can survive.

Some species like water monitor lizards, though, have managed to adapt well to such new environments with reduced biodiversity, a recent study found. “There was a consistent trend: the more disturbed the land, the more water monitors we found, while their numbers decreased as we moved away from plantations into untouched forests,” a researcher observed. “In fact, the Malay civet was the only native mammal recorded alongside water monitors in oil palm at all, and even this species preferred higher quality forest sites.”

It turns out, however, that there is another species of wild animal that is adopting well to palm oil-scarred landscapes better: Bornean bearded pigs. 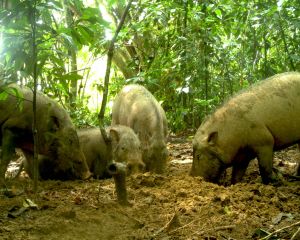 According to a study by conducted by the Sabah Wildlife Department together with the Danau Girang Field Centre (DGFC)  and published in the journal Wildlife Research, the wild pigs are increasingly treating cultivated areas as part of their new habitats. That said, the animals continue to prefer fragmented adjacent forests in the region of the Lower Kinabatangan Wildlife Sanctuary for wallowing and nesting.

“Our results are very interesting because they suggest just how important forests are for bearded pigs,” observes the study’s lead author, Kieran Love from DGFC. “Oil palm fruits may be exploited by bearded pigs, but pigs require many other resources that are typically found in their natural forest habitat,” the researcher elucidates. “Forests provide broad food resources, materials for nesting, areas for wallowing, and places for avoiding predators.”

Bearded pigs (Sus barbatus), which are so named for the flamboyant tufts of facial hair along their elongated snouts, are considered “vulnerable” in Sabah and can be hunted only with a license. Their populations in Peninsular Malaysia have plummeted over the past half century as a result of habitat loss fuelled by the spread of palm oil plantations that have taken the place of most forests. In Borneo, the pigs have fared somewhat better, but they remain at risk there too.

The fact that the pigs have been resorting to oil palm plantations to eke out new living spaces for themselves at the edge of fragmented forests is good news insofar as it means these resilient animals are able to take advantage of such plantations. “However,” a researcher cautions, “protected and connected forest habitats remain a critical need for bearded pigs, which have historically migrated hundreds of kilometres and are finding themselves boxed into an increasingly small world.”