This newly designe tire should be a boon to the owners of electric vehicles. Photo Credit: Goodyear

Electric vehicles are the vehicles of the future as motorists around the planet seek to wean themselves off fossil fuels. Yet some kinks in technology will still need to be ironed out in order for electric cars to be truly efficient. And, no, it’s not only batteries that will need to charge faster and last longer.

Take tires. Most tires used on electric vehicles have been designed for vehicles with internal combustion engines (ICE). Why does that matter? Because vehicles with ICE feature powertrains where the rotational force known as torque increases incrementally once the tires are spinning. Not so with electric vehicles, though, especially not with powerful models like Tesla’s. In these cars the sudden bursts of instant torque can wear out tires much faster. This can add to car owner’s worries and act as a drain on their finances because they need to shell out for new tires more frequently. 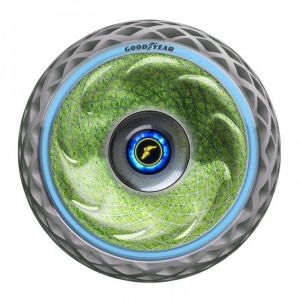 But now the American tire manufacturer Goodyear says it has found a solution to this problem. The company has just unveiled what it calls EfficientGrip Performance with Electric Drive Technology, which it says will reduce the extent of wear from high torque in electric vehicles. The newly designed tires feature thinner sipes (small channels) that facilitate a firmer grip on the road surface than traditional radial grooves do, allowing tires to withstand higher levels of torque better.

Electric vehicles tend to be considerably heavier than cars with ICE as a result of their chunky battery packs. To take that extra weight off tires, the company has also optimized the shape of tire cavities even as it has retained an optimal tread footprint for high performance. In addition, the company explains, “the sidewall has been designed to reduce aerodynamic drag and the profile yields less rotating mass, resulting in reduced energy consumption.”

But there’s more. In an inspired bit of engineering, the company has designed new environmentally friendly tires that have cultures of living moss embedded within their sidewalls. The encased moss can absorb moisture from the road to live while acting as plants do: that is to say, the moss-equipped tires will suck in CO2 from the air and release oxygen.

According to Goodyear, if every car in the city of Paris had these tires, an estimated 4,000 tons of CO2 could be removed from the atmosphere each year. That is equivalent to taking 4,500 cars out of circulation. This means that simply by driving around with such tires car owners would reduce their CO2 footprints.