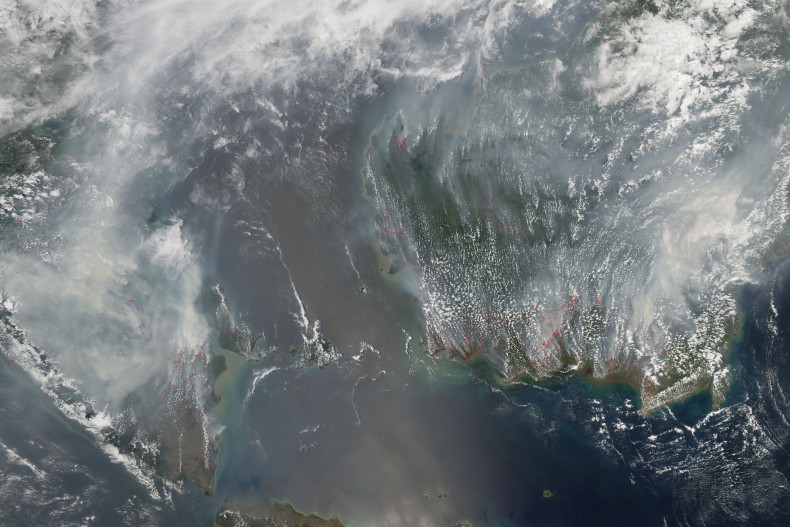 SouthEast Asia fires from Space by Nilfanion via Wikipedia

Indonesia has been pulling out all the stops in its ongoing fight against the haze-producing, greenhouse gas-emitting, peatland forest-destroying fires spreading across the islands of Sumatra and Kalimantan.  The country has sent nearly 21,000 personnel to fight the fires this year and is doing all it can, but its government has come under ‘fire’ recently for its refusal of outside help with the crisis.

This stubborn bent is controversial because what burns in Indonesia spreads thick smog over Malaysia and Singapore.  Air pollution readings in Malaysia rocketed past the ‘very unhealthy’ level of 200 last Sunday.  The country had to close schools for the second time in the month of September, and temporary shut-down was forced at an airport outside Kuala Lumpur when visibility dropped to less than 400 meters.  Haze epidemics like this happen at least every few years.  They cause higher mortality rates, economic disruption and direct destruction of tropical forests.  The effect on Malaysia’s environment is clear, and a solution to the problem is eagerly awaited.

Frustrations mounted when Singapore offered Indonesia aid twice this year and was twice refused – but according to the media, Indonesia’s vice president Jusuf Kalla is now saying he is open to foreign assistance.  Whether Singapore and Malaysia will offer assistance and whether Indonesia will actually accept it is unclear.

A more sure-fire way for Malaysia and Singapore to help was recently pointed out by Indonesian forest expert Herry Purnomo.

Purnomo reasons that because Singaporean and Malaysian businesses profit from the palm oil trade in Indonesia, they should contribute to the fires that it causes.  The logic is sound, and his recommendation offers a route for Singapore and Malaysia to help fight Indonesian forest fires without going through the Indonesian government.

No word has come back after Purnomo’s call for assistance, but a partial answer to the problem of Indonesian forest fires has been provided, and Malaysia and Singapore may take the initiative.