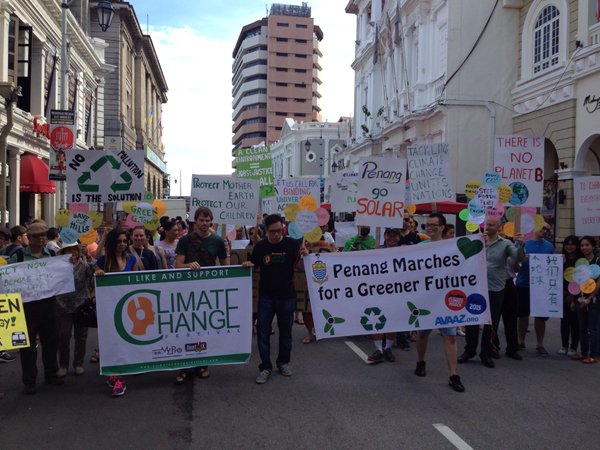 Today, on Sunday November 29, millions of people are taking to the streets and banding together against climate change.  The event is called the Global Climate March, its purpose is to pressure governments to find solutions to perhaps the world’s biggest problem at the upcoming COP21 global climate change talks in Paris, and Malaysians are showing their support.

At 8am this morning, Malaysians gathered in Penang for the march. Proceedings will include speeches, written messages and petitions sent to government leaders, and a march down nearby streets in support of climate action.  The exposition is proof of a growing environmental movement in Malaysia, and the show of solidarity couldn’t come at a better time.

The UN climate talks starting tomorrow and spanning through December 11 could be some of the most important world meetings our planet has ever seen.  If the earth’s average temperatures rise above 2 degrees Celcius, environmental disaster is inevitable.  We’ll hit that limit if we burn enough coal and oil to emit 565 gigatons of CO2.  Enough reserves have already been identified in the ground to emit 2,795 gigatons.  If we are to avoid an ecological meltdown, our industries, governments and cultures must change.

The Global Climate March sends the message that the challenge before us must be met, and Malaysia’s inclusion in the event is especially important.  The country is heavily reliant on fossil fuels.  As of 2012, its national energy consumption came 94.8% from coal, oil and natural gas.  This figure is decreasing as Malaysia encourages renewable energy development, but tropical deforestation, urban expansion and forest fires release more CO2 than the country could ever hope to cancel out by slowly switching to green energy.

Malaysia is also this year leading its entire region as chair of ASEAN, the Association of South East Asian Nations comprised of 10 countries including big CO2 producers Thailand, Singapore and Vietnam.  Also a member of ASEAN is Indonesia, whose oil palm fires this year have been emitting more CO2 than the entire US economy.  That the people and governments of Malaysia stand up against climate change, lead ASEAN by example and fight to improve their internal struggles with emissions and deforestation will be absolutely critical in the global effort to curb emissions.

Malaysia has the potential to become that green leader, but it hasn’t gotten there yet.  It was only yesterday (two days before COP21) that the country submitted its climate change commitments to the UN.  The main goal is a 45% reduction of greenhouse gas emissions by 2030.  Its achievement will rely on public as well as political commitment, and Penang’s turnout for the climate change march will drive both.

COP21 could be one of our last chances to change world industries, governments and cultures so that the critical 2 degree limit is not exceeded.  Starting tomorrow, 25,000 politicians from over 190 countries will discuss and agree upon the ways to stay under that limit and avoid global catastrophe.  All players – especially critical ones like Malaysia – must be onboard to make the shift.

Penang’s climate march is one of the earlier global iterations, as many march events are occurring in European or American time zones hours behind.  Over 2400 marches around the world have been officially registered as part of the event.  The message that climate change is important will be sent loud and clear – and Penang has started the party with a bang.