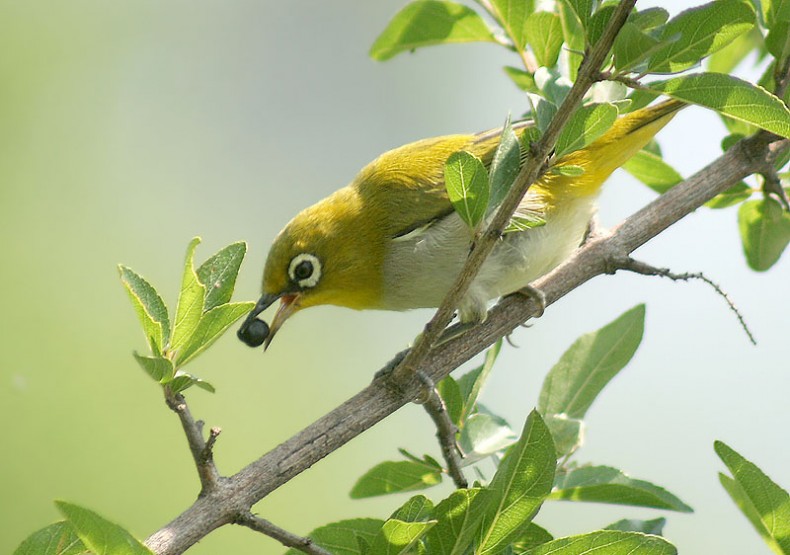 Though bird netting is illegal in Malaysia, its cultural significance and difficulty to regulate means the practice is a threat to migratory and native birds. Photo Credit: J.M. Gary via Wikipedia

It’s winter in the Northern hemisphere – a time when migratory birds flee the cold weather by flying south, many of them spending a few months in Malaysia’s tropical warmth before returning north in spring.

According to ‘A Naturalist’s Guide to the Birds of Malaysia’ the country is home to almost 800 species of birds, some seasonal, like visiting retirees, most resident throughout the year. Many of these birds flock in the padi fields, drawn by the nearly-ripened rice. It’s the time of year when young men and boys and cut lengths of bamboo poles and plant them in the ground. They span fine nets between the stakes, hoping to catch unsuspecting quail and water-hens as they fly in swooping circles, chasing insects through the air, above the nodding heads of grain-heavy rice.

The birds are tempted by enticing rice, or by the host of insects, rodents, fish, lizards and even snakes that play their parts in the complicated eco-system of the padi fields. Some birds become entangled in the nets. The nets are equal opportunity traps – they ensnare any species, whether seasonal or not, whether common or rare. Almost all will die a slow death from heat, dehydration and exhaustion as they battle against the unforgiving mesh. 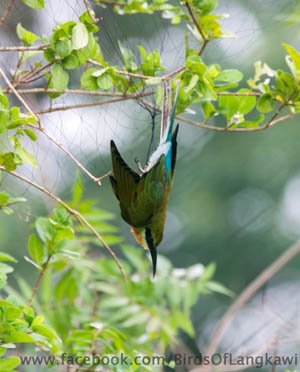 A songbird caught in a net in Langkawi.
Photo Credit: Soafian Zack – Birds of Lankwawi https://www.facebook.com/BirdsOfLangkawi/

This practice of bird netting is a common one, especially in Malaysia’s northern states where the flat land is suitable for the cultivation of rice. Netting is a traditional activity. The dead birds act as scarecrows and save the farmer’s rice. For some boys it is a rite of passage towards adulthood, for others it is a seasonal pastime. For some it is a source of free meat to supplement the meagre menu of poverty. Plucked and cooked these fowl will provide a simple meal.

Not all the birds are eaten. Not all the birds will die. Some survivors may be valued for the beauty of their feathers or their song and will be caged for entertainment. Sometimes feathers are exported to be tied to hooks as fishing flies.

The bird catchers may tell you that netting birds is no different from netting fish. They do not kill them to be intentionally cruel. They may ask you why you think a feathered songbird suffers more than a hooked or netted fish? You may meet young men who claim netting as their tradition, as a part of local culture, which it indeed most certainly is. But traditional or not, bird netting is illegal.

The wildlife department know of the problem but don’t have the resources to police every padi field. If you see a bird net you can take a photo and send it with the precise location to the wildlife department via Facebook https://www.facebook.com/Jabatan-Perhilitan-Semenanjung-Malaysia-208535215826654/ or Twitter https://twitter.com/PERHILITAN