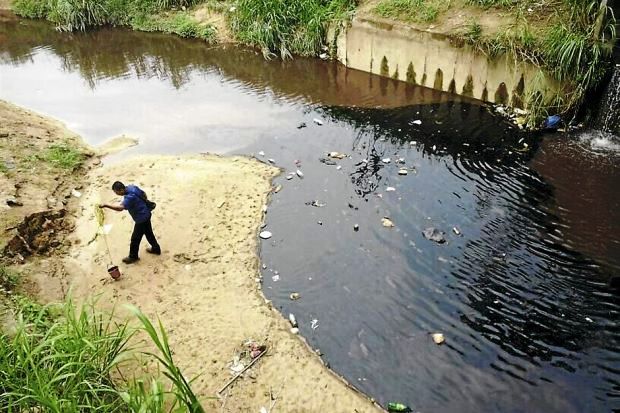 A Malaysian worker inspects the extent of a diesel oil spill at a treatment plant in Petaling Jaya. Photo Credit: The Star Online

Azure waters. Palm-lined sandy beaches. Picturesque corals with bountiful marine life. So go the usual descriptors of Malaysia’s shorelines in popular tourist brochures, which dutifully reel off the pristine beauties of the country’s natural maritime features and resources. Such laudatory prose isn’t unjustified, of course, but a lot of those pristine waters and beaches have come under intense pressure from runaway pollution, helter-skelter development and frequent oil spills.

Between 2009 and last December, for instance, a whopping 121 cases of oil pollution were reported in Malaysian waters, with 15 of them occurring last year alone along the beaches of Terengganu and Pahang states. And that’s not counting the slow but steady drip-drip of pollutants into the sea from factories and communities along shores. Meanwhile, as Malaysia and its neighbor Brunei and Indonesia are all major oil producers, there remains a constant risk of new oil spills around the country with potentially devastating consequences.

The Ministry of Natural Resources and Environment is aware of the environmental hazards from such spills, and Minister Datuk Seri Wan Junaidi Tuanku Jaafar has pledged to take measures to prevent them. Among the measures are newly drafted regulations for Marine Oil Pollution Control; updated guidelines on The Use of Oil Spill Dispersants in Malaysia; and the verification of international Marine Oil Pollution Prevention and Control mechanisms. Stricter enforcement of such rules, guidelines and regulations will be necessary to ensure the country’s remaining and unspoiled maritime resources remain unmarred by extensive pollution.

“We cannot say that the environment is not important,” the minister stressed at a symposium on marine conservation. While combating religious extremism remains a high priority for Malaysia, he noted, so should the protection of the environment be of critical import. “The environment can kill us quietly if we’re not careful,” he said.

The last major oil spill in Malaysia’s waters occurred in 1992, when upon collision with a container vessel the tanker Nagasaki Spirit sprang a leak and discharged 13,000 tons of crude oil into the sea just off the coast of Sumatra. Less noticeably, however, tankers are known to have discharged oily wastes illegally into the maritime waters of the Straits. Inland, meanwhile, several plants and factories have over the years created localized environmental disasters by dumping or accidentally releasing oil and other toxic waste into their environs.

Oil, especially in larger amounts, can do grave harm to aquatic and marine life by smothering animals, particularly those living on the surface like birds, with viscous coatings that prevent them from breathing or regulating their body temperature. Lighter oil slicks of diesel and gasoline are highly toxic and can kill animals that come in contact with them. Meanwhile, “heavier” oils, of the kind that is used for fuelling ships, can form gooey surfaces on water and on shores, persisting there for months or years while slowly poisoning resident flora and fauna.