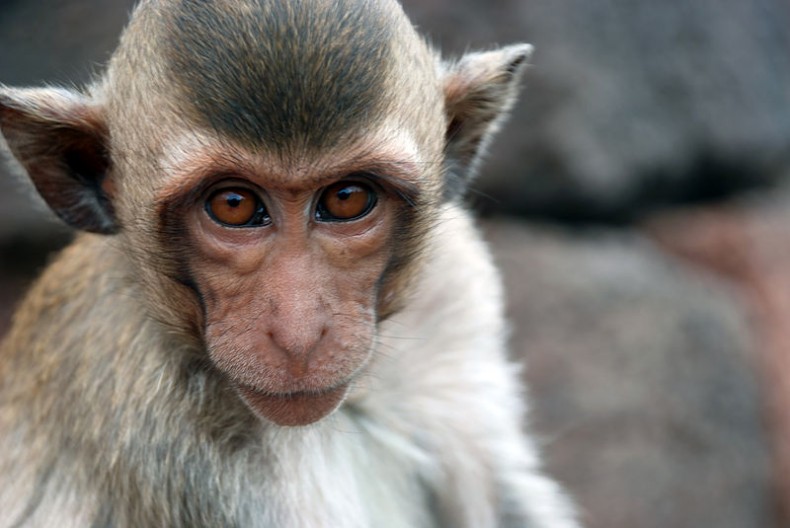 A crab-eating macaque gazes pensively into the camera. Let's hope all monkeys will have plenty to celebrate throughout this coming Year of the Monkey. Photo Credit: Wikimedia Commons

The Year of the Monkey is just about to kick off according to the Chinese calendar so we might as well make the coming year one in which we pay a lot more heed to the wellbeing of monkeys and other wildlife. That is the message of Ang Lai Soon, a Malaysian Chinese environmentalist in Sarawak, for the citizens of the country.

The earth’s resources are finite, he warned, and we will continue recklessly exploiting them at our own peril. He noted that the planet, already overpopulated, will see further population explosions in coming decades, especially in India and on the African continent. The number of people on earth is projected to rise to over 11 billion by 2100, from the current 7-plus billion, thereby ballooning by another 40% within less than a century from the current figure. All these new mouths to feed will place further strains on already stressed ecosystems in developing countries, which can ill afford to feed and house their current populations as it is.

“This [is] the most important day in the year for every ethnic Malaysian Chinese, and is one when we can allow ourselves to be proud of our contribution to the harmony and prosperity our nation enjoys,” the prominent social and environmental activist said. Cheers to that.

Here is hoping that the coming year will be a better one than 2015 – the Year of the Sheep in the Chinese zodiac – was, given that last year was fraught with plenty of setbacks and outright disasters. Primary among them was the bauxite fiasco in Pahang, which wreaked havoc on the local ecology, both on land and in the sea. Wildlife trafficking remained rampant and government initiatives to curb it appeared to be half-hearted and generally inefficient.

“We have not seen any notable illegal wildlife trader arrested [over the past year],” environmental activists Sean Whyte and Jennifer Yeap pointed out in early January while reflecting on the environmental failures of 2015. “We have seen more cases of illegal logging – though, seemingly, law enforcement officials have not.” They added: ” Attitudes towards animals in Malaysia seem entrenched in the 19th century.”

That may be a bit harsh as the country has come a long way in addressing environmental issues, albeit with mixed results. Yet it’s undeniable that far more will need to be done if citizens of the nation want to ensure that their children and their children’s children will enjoy the same natural bounty as they and their parents have done. May the Year of the Monkey be a good one in Malaysia for wild animals, monkeys included!