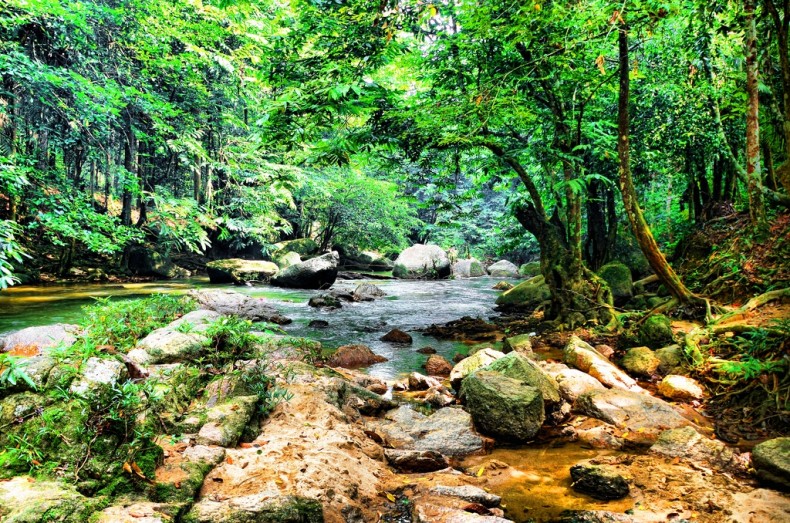 The Lentang Permanent Forest Reserve in Pahang is famous for its surpassing beauty, yet illegal loggers have increasingly left their marks on local arboreal ecosystems. Photo Credit: Abdul Rani Abdul via Flickr

The Lentang Permanent Forest Reserve, in Pahang, is just what its name says it is: a forest reserve where the woods are protected by law so that they can stay intact permanently. Has that prevented illegal loggers from wantonly destroying whole swaths of virgin forest? You’ve guessed it: no. Illegal logging in the reserve has remained rampant, according to the environmentalist group Association for the Protection of Natural Heritage of Malaysia (PEKA), which has gathered strong evidence to prove it.

Deep within the forest reserve, which is famous for its scenic waterfalls and burbling springs, PEKA’s researchers have found clears signs of illegal logging activity: the truncated trunks of endemic arboreal species, including shorea and chengal trees, which are prized in Malaysia for their durable and beautifully textured timber. The environmentalists have also discovered signs of improvised infrastructure constructed by loggers for hauling newly felled timber out of the forest with greater ease. It was “a very sad sight indeed when forest trees and timber are arbitrarily felled, including at the (local) river buffer zones,” said PEKA president Puan Seri Shariffa Sabrina Syed Akil.

The National Forestry Act of 1924 prohibits any damaging activity in a permanent forest reserve and prescribes a fine of RM50,000 and/or up to five years in prison as penalties for breaking the law. But continue to break the law local loggers do. PEKA has long been providing clear evidence of sustained logging around the Permanent Forest Reserve in Lentang, including photographic evidence. A local living in the area has also reported seeing “timber lorries often enter[ing empty] and exit[ing] laden with timber near our house about four to five months ago.”

It’s not as if Malaysia, most of whose tropical rainforests forests are mere shadows of their former selves, can afford to lose yet more trees to logging. According to advanced new satellite images of tropical rainforests worldwide, Malaysia’s included, most of the world’s forest cover has shrunk considerably in recent years. Among the main culprits have been forest fires, relentless deforestation to make way for palm oil plantations, and encroaching development. In Malaysia, plantations cover almost a third of the land area that once used to be covered in thick rainforests.

Rachael Petersen, an analyst who worked on the global survey of tropical rainforests, observed: “It should make us a little bit concerned about how plantations expand onto natural forests.” Agreed … except that we should not be only “a little bit” concerned. We should be very, very concerned.