The Capture of a Sumatran Rhino rekindles Conservationist Hopes

Endangered species may at times seem a bit like mythical creatures: they can be so elusive that rarely if ever may anyone catch sight of them in the wild. And so it has been with Sumatran rhinos. The critically endangered species was declared extinct last year in Malaysian Borneo, but conservationists believe that around 100 rhinos may remain on in the forests of neighboring Indonesia.

The trouble is that for the past four decades no one has clapped eyes on a Sumatran rhino alive in the wild … until now, that is. Conservationists have now not only seen one alive but managed to capture one safely in a pit trap set in Kalimantan, the Indonesian part of Borneo. “That’s a very, very rare thing,” noted Simon Stuart, a rhino expert at the International Union for the Conservation of Nature. “Finding a single Sumatran rhino is good news given we can’t even account for (the estimated) 100 in the [wild].” Another nine Sumatran rhinos remain in captivity around the world. 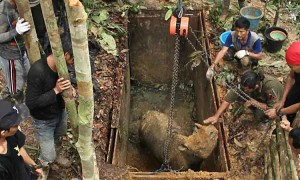 Indonesian conservationists tend to a female Sumatran rhino caught in a pit trap. She is safe and sound. Photo Credit Ari Wibowo via WWF

The newly captured rhino, a young female, can now be protected from poachers and perhaps used in a breeding program in the wild when she is released to an undisclosed location. It’s a poignant reminder of the state of affairs in the world’s forests that in order to have a chance of survival, members of some endangered species might have to be heavily protected from people trying to kill every last one of them.

Sumatran rhinos (Dicerorhinus sumatrensis) are the smallest living rhinoceroses. Adult males grow to between 2 and 4 meters in length and reach up to 1.5 meters in height. They can weigh a maximum of 950 kilograms, making them considerably smaller than any other rhinos alive today. They sport two horns and are covered in long reddish-brown fur. They are elusive animals that lead largely solitary lives in dense tropical rainforests in central Borneo and on the island of Sumatra. Like all other rhinos, they are hunted for their horns, which are highly prized on the international black market as ingredients in traditional Chinese medicine.

Until now, rare proofs of the continued existence of Sumatran rhinos in the wild had consisted of occasional footprints and a single camera trap image taken in Kalimantan. “This is an exciting discovery and a major conservation success,” said Dr Efransjah, CEO of WWF-Indonesia. “We now have proof that a species once thought extinct in Kalimantan still roams the forests, and we will now strengthen our efforts to protect this extraordinary species.”

The last few dozen wild rhinos continue to face severe threats from poaching and habitat loss. The captured female rhino is currently kept in a temporary enclosure but will soon be transported by helicopter to her new home: a protected forest about 150 kilometers from where she was captured. Conservationists are racing against time to save not only her but her entire species as well.

“Providing a safe home is the only hope for the survival of the Sumatran rhino for many generations to come,” Efransjah said. Marco Lambertini, director general of WWF International, added: “This unprecedented discovery and unparalleled operation boosts our hope to save one of the most endangered species and an iconic symbol of the majestic Asian rainforests.”

May she and her species live long and prosper!