The End of all Bananas? Possibly 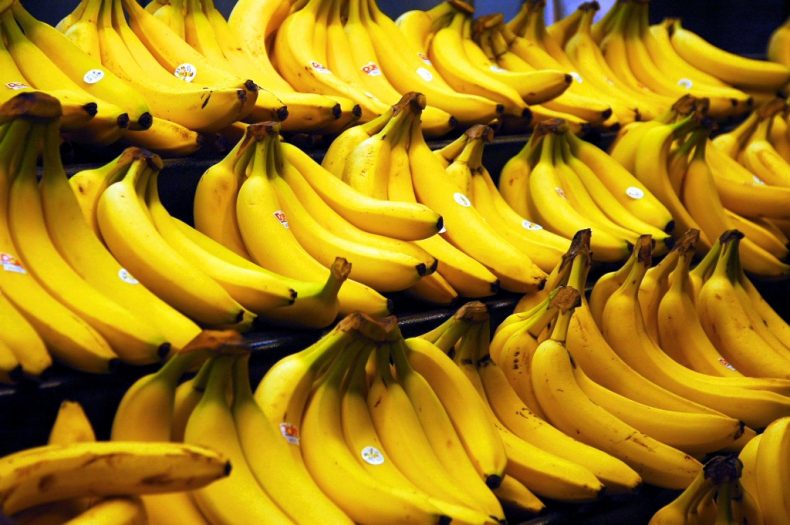 Bananas. Don’t we just love them? Not only are the elongated yellow fruits very tasty and nutritious; they are also an invaluable part of many people’s and animals’ diet.

But here’s something that should give us pause: bananas are endangered plants. That may seem like a silly statement to make, sure. After all, bananas are cultivated wholesale in 120 countries across the tropics from South America to Africa to Southeast Asia. Collectively, these countries produce 100 million tons of the fruits each year. It’s not their limited numbers, though, that cause banana trees to be at risk of extinction; it’s their vulnerability to diseases.

Researchers in the US and the Netherlands have warned that several strains of a fungus pose clear and present dangers to the world’s banana plants. In fact, the fungi could wipe out the planet’s entire crop of the essential fruits within a matter of years. 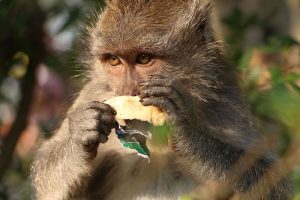 A macaque snacks on a banana. Photo Credit: Wikimedia Commons

“This parallel change in metabolism of the pathogen and the host plant has been overlooked until now and may represent a ‘molecular fingerprint’ of the adaption process,” Stergiopoulos added. “It is really a wake-up call to the research community to look at similar mechanisms between pathogens and their plant hosts.” The three strains could prove fatal to banana trees by compromising their immune systems and undermining their metabolism by feeding on host plants’ sugars and other carbohydrates, he explained.

Worse: the fungi could spread with alarming speed around the globe. In the 1950s, a deadly strain of the Panama disease, a soil-borne fungus that attacks plants’ vascular systems through their roots, did just that, wiping out almost all of the popular Gros Michel (“Big Mike”) bananas in Central and South America. As Gros Michel bananas went nearly extinct, cultivators switched to Cavendish bananas, which were resistant to the disease-causing fungus and have since become ubiquitous in supermarkets worldwide. But then in the 1990s a new strain of the fungus, which originated in Taiwan, began to spread worldwide, soon reaching Malaysia itself. Cavendish bananas have been under threat ever since.

The destructive Sigatoka pathogens, which were discovered in the previous century and whose genomes have now been sequenced, could similarly inflict immense damage on the world’s banana plants, Malaysia’s included. In fact, they could eradicate all bananas within a decade, researchers say. A third of banana production already involves the application of fungicides, but many farmers cut costs by using sub-standard fungicides, which could aid the pathogens’s spread. 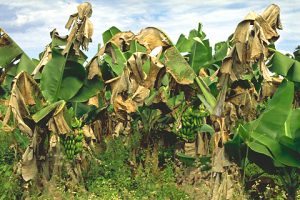 To make matters worse, bananas are grown from shoot cuttings and all the Cavendish bananas have been grown from a single plant, which means they are genetically identical clones of one another. With their limited genetic diversity, they are all the more susceptible to devastating diseases. A disease that can kill one plant can kill them all with equal ease.

The solution: develop a new cultivar, or else genetically modify existing Cavendish plants to make them resistant to the fungal diseases. That, though, is easier said than done, especially when it comes to applying either solution on a global scale.

Bananas are large monocotyledenous herbs that originated in Southeast Asia with virtually all of the known cultivars having been handpicked from naturally occurring local hybrids by prehistoric farmers in what are now countries like Malaysia. Bananas were among the first plants cultivated by humans, yet ironically they may be the first plants, too, that may end up being lost to us.

We can’t just blame fungi for that, however. Fungi are amoral organisms that do what is in their best interest: thrive and spread any way they can. They destroy banana plants not because they are “evil” but because evolution has primed them to survive by destroying bananas and other plants susceptible to them.

But how about us? Why is it that Cavendish bananas, those tasty yet highly disease-prone fruits, have become so common worldwide? The answer lies in our fussiness and insistence on nothing but the best in our fruits and vegetables, including bananas. Driven by the spoiled ethos of our consumerist culture, we want bananas to taste just so and we want them to look just so, too (nice and large and without any spots or blemishes).

Banana producers have been happy to oblige, in their search of hefty profits, by investing all their resources in a single crop. And so there you have it: in our quest for perfect bananas, we may have unwittingly sown the seeds of their ultimate destruction.