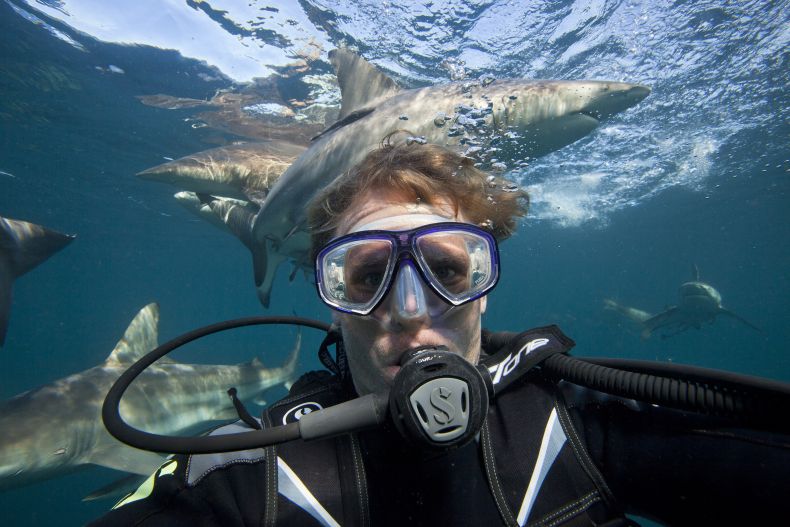 Let Aaron “Bertie” Gekoski take you on a ride … into the forests of Sabah. The award-winning wildlife photographer and television presenter, aka the “shark selfie guy,” is in the Bornean state to headline an online documentary series for Scubazoo, a Sabah-based underwater production company.

Called “Borneo Wildlife Warriors,” the series will explore Sabah’s wondrous wildlife and the people who seek to preserve it. The series follow the documentary filmmaker’s first televised outings in the state, “Borneo from Below,” which took a look at the state’s cornucopia of natural wonders beneath the surface of the sea. 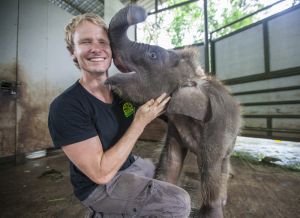 Gekoski plays with Jo, an orphaned baby elephant whose plight alerted him to the dire state of Borneo’s trademark pachyderms. Photo Credit: Scubazoo

Gekoski, a fashion photographer turned conservationist, takes a lighthearted approach to wildlife conservation, complete with stunts, in the vein of the late Australian environmentalist Steve Irwin. Make no mistake, though: the 36-year-old adventurer does not flinch from exploring contentious issues.

Wildlife  trafficking, the exotic pet trade, shark finning, blast fishing – they are all subjects he explores in short lively episodes. He does so hand in hand with local experts and wildlife officials in an attempt to bring attention to the most pressing issues of conservation in one of the world’s most biodiverse areas.

“It’s basically a reality show on our wildlife rescuers and it also showcases the many wonderful characters within the WRU [Wildlife Rescue Unit] who are doing great deeds,” the unit’s assistant director Dr. Sen Nathan was quoted saying. “It depicts the superhuman efforts that our heroes employ to save the wildlife in Sabah.”

Throughout the series the conservationist will be accompanying Sabah’s dedicated team of wildlife vets and rangers in the field and reporting back to viewers worldwide about their heroic efforts to save wild animals, from orangutans to sun bears, as well as their habitats.

In the first 8-minute episode of “Borneo Wildlife Warriors,” which is available online, Gekoski explains his motivation for joining these intrepid wildlife warriors who work tirelessly to save animals from poachers and traffickers. In 2013, the British naturalist saw the news about a herd of 14 Bornean elephants that were found poisoned near a palm oil plantation in Sabah, with only a young, newly orphaned calf (soon named Baby Jo by his keepers) managing to survive. “I was desperate to get more deeply involved,” he notes, “but there was only so much I could do.”

Now he can do a lot more by publicizing the plight of Borneo’s elephants and other endangered species. “I have slowly fallen in love with these magnificent creatures and I’ll do whatever it takes to help [them],” he says.