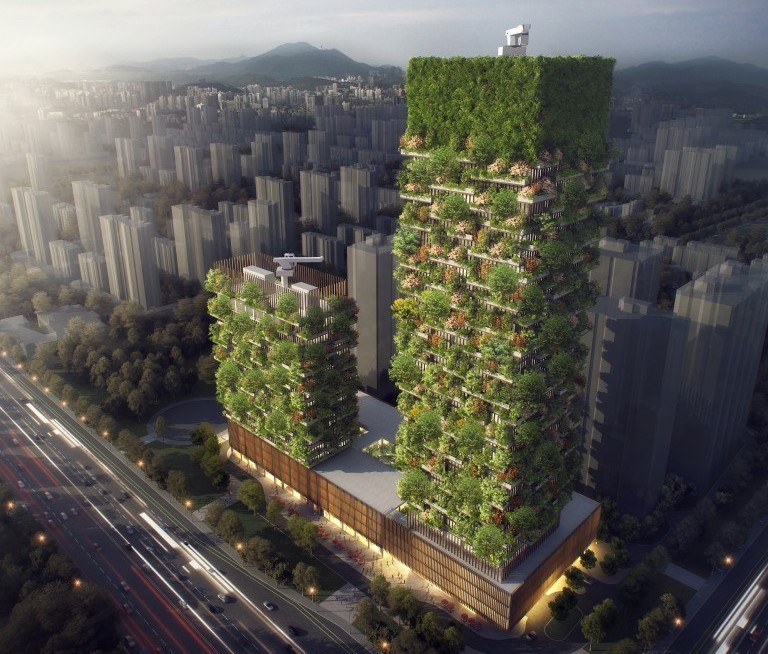 If the city of Nanjing is known for anything, it’s definitely not a clean and green environment. In the capital of China’s eastern Jiangsu province, air quality hovers at dangerously high levels all year round. At times it’s not uncommon for air pollution to get so bad that the sky turns pink from the smog.

But when an Italian design firm’s plans are completed next year, some of the city will become a veritable urban oasis of greenery. And a vertical oasis at that. 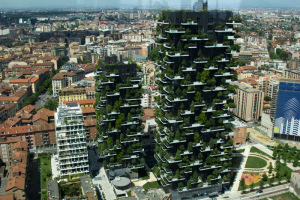 A pair of green buildings in Milan has served as the model for China’s own vertical forests in the making. Photo Credit: Stefano Boeri Architetti

According to the designs of the firm, Stefano Boeri Architetti, two new skyscrapers will be covered in cascading plants so as to help the city clean up its air. In all, 1,100 trees and 2,500 shrubs will grow and hang from balconies all the way down. The rooftop, too, will be a haven of greenery, turning the two buildings called the Nanjing Green Towers (which will be home to offices, a luxury hotel, a school and a museum) into artificial “forest towers.”

These “vertical forests” will be the first of their kind in Asia and are based on the design of Milan’s prototype Vertical Forest Residential Towers, which opened in 2014 in the Italian city. The two towers in Milan reach to heights of 110m and 76m respectively, hosting 900 trees and more than 2,000 plants from a variety of species arranged artfully around the buildings.

In Nanjing’s version of the vertical forests, 600 tall trees and 500 medium-sized trees from 23 local species will inhabit the buildings with another 2,500 cascading plants and shrubs covering a 6,000sqm area: “a real vertical forest, contributing to regenerate local biodiversity, that will provide 25 tons of CO2 absorption each year and will produce about 60kg of oxygen per day,” the design firm promises.

Such vertical green building will be increasingly welcome, and necessary, in today’s urban environments where horizontal space is less and less available for development. In Malaysia too, green buildings have been on the rise, both literally and figuratively; so much so that the country’s soon-to-be tallest skyscraper will be wholly green.