An albino Orangutan is found in Borneo 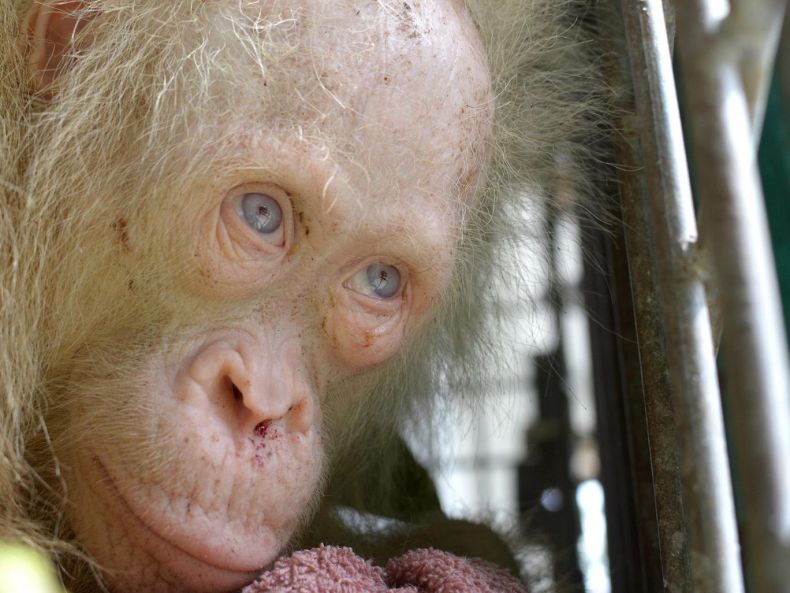 Albinism is a genetic disorder characterized by a lack or complete absence of pigmentation in the skin, fur and eyes. As a side-effect, albinos are sensitive to light and sunshine.

In orangutans it’s a very rare condition so it has become global news that a rare albino orangutan with pale blonde hair and sky-blue eyes was rescued in Central Kalimantan, the Indonesian part of Borneo. The female primate, which is around five years old, was kept as a curiosity of sorts by villagers in a remote community before conservationists and police rescued the animal after being alerted about her.

“Orangutans are rare, and an albino orangutan is even rarer,” said Nico Hermanu, a spokesman for The Borneo Orangutan Survival Foundation (BOSF) in Indonesia. “Since BOSF was founded 25 years ago, we had never before taken in an albino orangutan at our rehabilitation centre,” which currently has almost 500 orangutans.

In pictures taken of the newly rescued orangutan, which has yet to be named, she has dried blood caked around her nose. Experts believe she might have been injured while villagers were seeking to capture her from the wild. Conservationists are hoping to release the rare primate back into the wild after she recuperates from severe dehydration and some minor ailments.

Animal experts believe there might be other orangutans with albinism living in Borneo’s forests because the disorder is genetic and passes from parents to offspring. Yet whatever their color, orangutans need all our help. The intelligent and gentile primates are listed as “critically endangered” and have seen their numbers drop over the past decades owing to relentless habitat loss and occasional poaching.