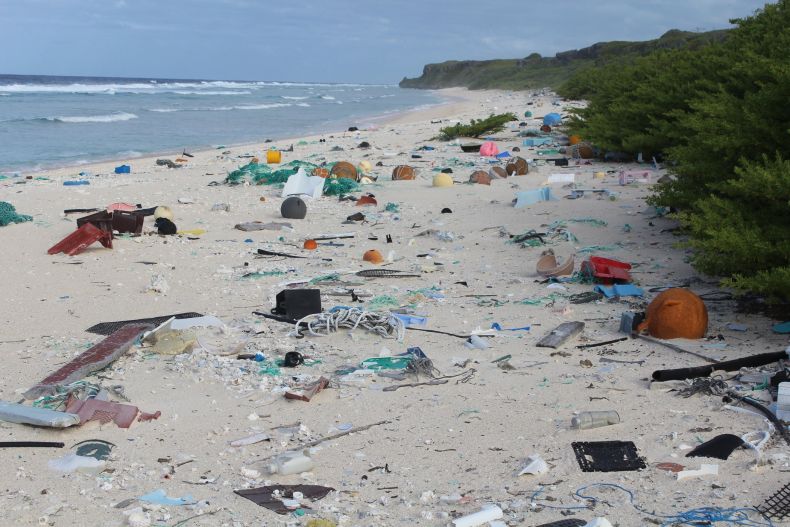 A beach on the remote island of Henderson in the South Pacific is littered with consumer waste. Photo Credit: Jennifer Lavers

You know the feeling, that sinking feeling: you head down to a nearby beach for a bit of sunbathing, swimming or lying on the sand … only to find the beach overrun with other people and strewn with rubbish. We’ve all been there, yes. Wouldn’t it be great if we could make it to one of those remote island beaches somewhere in the Pacific, say? They must still be super-pristine. Right?

Turns out that one of the world’s most isolated islands is also one of its most polluted. Henderson Island, a tiny piece of real estate in the South Pacific where no one lives, is deemed to be among the planet’s most remote islands. In fact, it’s so remote that only researchers visit it now and again (every five to 10 years). UNESCO has listed the island as a World Heritage site, thanks to its beauty and remoteness. 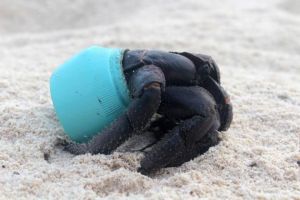 A crab uses a plastic container as a home on Henderson Island. Photo Credit: Jennifer Lavers

This extreme density of rubbish on its beaches has caused the remote British-owned island, which lies halfway between New Zealand and Chile in South America, to enjoy the dubious distinction of having the densest plastic pollution ever recorded anywhere on Earth so far.

“The quantity of plastic there is truly alarming. It’s both beautiful and terrifying,” said Jennifer Lavers, a research scientist at Australia’s University of Tasmania, who was the lead author of a study on the island’s plastic pollution, which has been published in Proceedings of the National Academy of Sciences. Lavers and six other researchers stayed on Henderson Island for several months in 2015 for their study.

Massive amounts of plastic waste wash up on the island, which is 10 kilometers long and 5 kilometers wide, because it lies near the center of the South Pacific Gyre ocean current that sweeps vast quantities of flotsam into its direction: some 13,000 pieces of trash every single day.

Needless to say, local animals have not been left unscathed. The researchers have found a dead sea turtle that had perished after getting caught in a discarded fishing net. They also discovered a crab living inside a cosmetics container. “We need to drastically rethink our relationship with plastic,” the researcher said. “It’s something that’s designed to last forever, but is often only used for a few fleeting moments and then tossed away.”