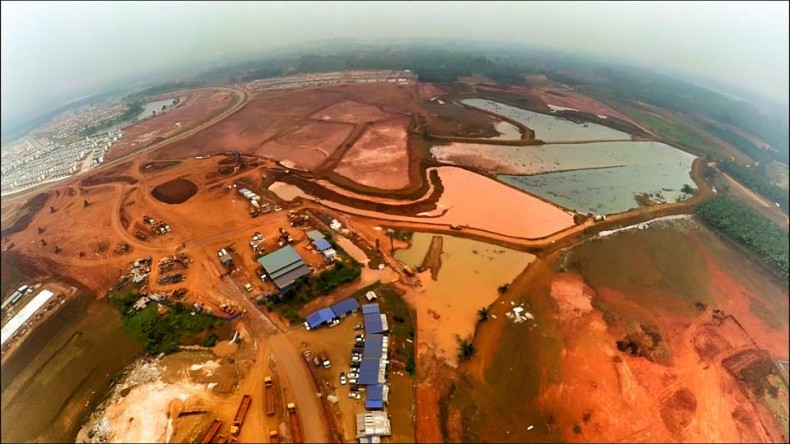 Malaysia's recent ban on environmentally disastrous bauxite mining will mean a break from scenes like this - will the relief be temporary or will the government properly regulate the industry? Photo Credit: GERAM

The debate surrounding Malaysia’s bauxite mining industry is nearing a fever pitch.  National bauxite exports have exploded from around 100,000 tons in 2013 to over 2.5 million last year to what could be more than 20 million for 2015.  Legal and illegal mining operations have sprung up everywhere, spreading carcinogenic red dust created during mineral extraction and transportation across town and country alike.  Promises of industry regulation that would stem the flow of contamination have been made – some kept, but many broken.  Hundreds of farmers have sold their land to mining contractors who dig it up, scoop out the cash, leave it barren, and refuse to pay the landowners.  Meanwhile, levels of arsenic, lead and mercury in water and wildlife have shocked researchers and blown past acceptable levels.  Adults and especially children are getting sick, suffering asthma attacks from breathing in dust and contracting skin disease from touching it.  The largely unknown long-term consequences of contamination will echo through generations of plant and animal life, but production continues largely unabated.

For all of these reasons, over 2,400 residents of port town Kuantan – so inundated by red bauxite dust that it has been compared to Mars – have signed a petition.  It begs not for industry shutdown, as one might expect from a population in such distress, but for the realistic and critical goal of better industry regulation.

This message has been heard.  On November 16, Kuantan parliamentary representative Fuziah Salleh put forward a request for a temporary ban on bauxite exports from her state of Pahang, where Malaysia produces the bulk of this material.

Natural Resources and Environment Minister Wan Junaidi accepted the suggestion.  This constitutes a huge step in the right direction for the Federal Government, which has previously made only tentative regulatory promises pending test results and cost analyses that seem to get delayed longer and longer.  A temporary ban could allow a little breathing room, a critical step back, for an industry that has seen such explosive growth that it’s scarcely under government control.  With proper regulation, bauxite is actually one of the most sustainable minerals to extract.  The ban could facilitate progress towards that goal.

But to all this, there’s a catch.  Before even this temporary ban – set in place just to improve regulations – can be enacted, the Federal Government must reach an agreement with that of Pahang State.

“We will meet with the state government to discuss the matter,” Wan Junaidi said during Malaysia’s 2016 budget meetings.  But given the disposition of Pahang’s government towards bauxite, and the profits that come with it, even a temporary ban will be a hard sell.

After repeated distress calls from citizens, the Pahang Government argued in September that bauxite mining was essentially too lucrative to stop.  This was just after water quality tests returned levels of mercury, lead, silver and many other metals that exceeded allowable limits even for irrigation.  At that time, around RM750 million (US$171 million) had been generated from bauxite mining in 2015, five percent of which (US$8.4 million) went to the government. 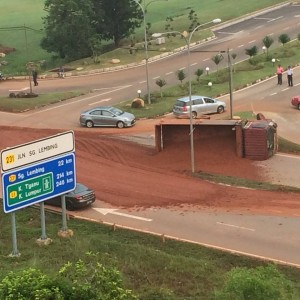 That argument constituted a big change of tone from the Government even since early this year.  In February, the Pahang Government actually promised to shut down mining operations if a solution to the pollution problem wasn’t found.  Proposed “solutions” were attempted, the biggest of which was a rule that the lorries (giant trucks) transporting bauxite from mines to boats couldn’t use main roads as trading routes.  The rule was temporarily followed to some extent but lorry traffic between Kuantan and mining sites appears heavy now, and changing transportation routes does nothing for the river, ocean and groundwater contamination that are wreaking environmental havoc, scaring residents and now threatening drinking water supplies.

It appears that as bauxite mining becomes bigger and more lucrative in Pahang, the State Government becomes more likely to side with economic gain than with public interest and environmental health.  Given the consequences of bauxite pollution, the resistance with which any slow-down of mining activity has been met is a testament to Pahang’s (and Malaysia’s) addiction to bauxite cash. 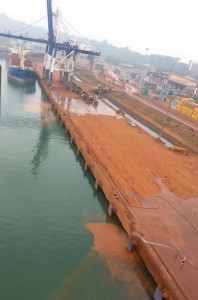 The short-term consequences of bauxite pollution are evident – asthma, skin disease, water contamination and die-off of aquatic species.  The long-term consequences are easy to guess at – cancer, birth defects, soil erosion, ecosystem destabilization and even agricultural production decrease.  A 2009 Human Rights Watch report on bauxite pollution in Vietnam observed all of these effects when the country was exporting an average of30,000 tons of bauxite per year.  Remember, Malaysia’s 2015 exports could total over 20 million tons.

That the Pahang Government takes this request for a temporary export ban seriously is of great importance to Malaysia’s people, its natural environment, and its economic future.  Malaysia must take its eyes off of short-term economic gains and focus on the important issues of sustainability and public helath.

“God willing, we will bring this matter up with the state government soon,” said Natural Resources and Environment Minister Datuk Wan Junaidi of the proposed ban.  He couldn’t have put it better.