Another Zoo in Sabah? Perish the Thought! 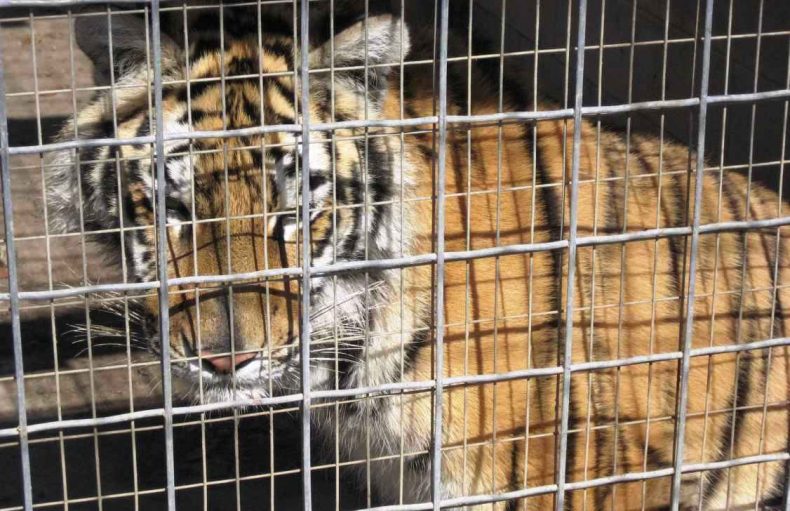 A tiger languishes in a cage. Majestic animals like this belong in the wild, not in zoos. Photo Credit: Cultured Vultures

Sabah may well get a new wildlife park. The state’s Tourism, Culture and Environment Minister Panglima Masidi Manjun has announced that talks are underway to create a new zoo (euphemistically called a “wildlife park”) in Penampang, although the details of it have yet to be worked out.

Good news? That depends. If you enjoy watching wild animals spending all their time lethargically in small cages and enclosures, then you might be pleased at the prospect of having a new zoo in Sabah. Otherwise, you might well be opposed to the idea.

That’s not to say that zoos are all abominations. Hardly. If managed well, zoos can serve useful functions. They can provide refuges for captive wildlife. And they can educate people, especially children, about animals, about the need to protect them in the wild, and about the importance of preserving their natural habitats.

The trouble, of course, is that zoos in Malaysia tend not to be managed well. Despite Malaysia being a world-renowned hotspot of biodiversity, the country’s zoos – or most of them at any rate – are abysmal places. They are invariably second-rate and third-rate affairs with substandard enclosures and only so-so care for animals, if that. At some of them, animals are held in appalling conditions. 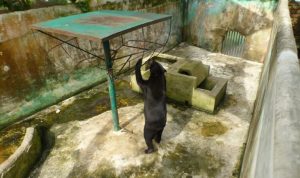 A forlorn sun bear inside his shabby confines at the Miri Crocodile Farm in Sarawak. Photo Credit: FOTO

A case in point: In June, the conservationist group Friends of the Orangutans reported here on Clean Malaysia that Malayan sun bears at the Miri Crocodile Farm in Sarawak were visibly stressed, were kept in dismal conditions inside a concrete pit, and had to face routine abuse at the hands of staff who took a cub away from its mother to use it in photo-ops for tourists.

Malaysian and foreign animal lovers were outraged and rightfully so. “These poor bears seem to be confined in a deep pit of a concrete prison surrounded by stained, high walls and with nothing but filthy, stagnant water on the ground in place of a clean, fresh pool which all bears need and desire for their well-being,” one of them, an Australian who frequently visits Malaysia, wrote in a letter to the editor. “The entire cell is dank-looking, devoid of any enrichment, and medieval in its structure. How is this allowed?” How indeed?

“Sun bears are supposedly a protected species throughout Malaysia, including Sarawak, so this treatment of them is illegal,” the writer went on. “It is shameful to keep these inquisitive, intelligent and sensitive animals holed up like criminals.”

Which brings us back to the proposed new zoo in Sabah. The question we should all ask is whether authorities can give us guarantees that it will have modern, spacious and well-equipped facilities to provide sufficient care and enrichment to resident animals. We all know the answer to that. If we are to judge by the state of affairs at Sabah’s existing zoos, we should not be holding our breath.

Last year Sabah’s Yuk Chin Mini Zoo, which was set up in 1994 and run at a primary school in Tawau, was forced to close down after pressure from animal rights advocates. The animals at the mini zoo, dubbed “the zoo from hell,” had been kept in horrible rusty little cages with no care and no oversight. Many of the animals were visibly malnourished and some had died for want of food and care. They also had to face routine abuse. Some children were recorded kicking their cages and taunting them. Ironically, the stated purpose of the zoo was to educate youngsters about animal welfare. 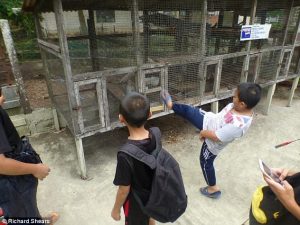 A boy kicks a monkey’s cage at the Yuk Chin Mini Zoo in Sabah before the zoo was forced to close down. Photo Credit: Richard Shears/Daily Mail

Nor is the situation all that much better at Sabah’s Lok Kawi Wildlife Park. “This is a sad, sad park,” one foreign visitor to the zoo noted. “I really expected an area that would encourage the Eco tourist as it’s difficult to see native animals in this part of Borneo in nature. This was a tired old zoo, in disrepair… I came away very distressed by the conditions and cannot believe more money has not been invested in what could be a real attraction.”

So we might be forgiven for not wishing to see yet another zoo in Sabah. The animal rights group Malaysian Friends of the Animals does not want to see one, either. The NGO is strongly opposed to the new zoo. Rather than create yet another attraction with captive animals, the state should focus on preserving wildlife in their natural habitats, explains Jennifer Yeap, a member of the group.

“Sabah is blessed with an abundance of iconic wild animals such as the orangutan, sun bear and Borneo pygmy elephant,” she observes. “Why would wild animals in Sabah (and other imported animals) need to be punished with captivity when focus should be on protecting their ever dwindling habitat? Isn’t protecting forests in Sabah to secure the future of its wildlife the real conservation question here?”

It’s hard to argue with that.

“The tourism focus in Sabah should be of investments in ethical wildlife viewing through ecotourism,” Yeap adds. “This also helps the local economy. There is big potential in Sabah in expanding its ecotourism activities.”

Yes, there is. And forget about new zoos.