Littering and Food Waste may bring us Unwelcome Visitors … like Snakes 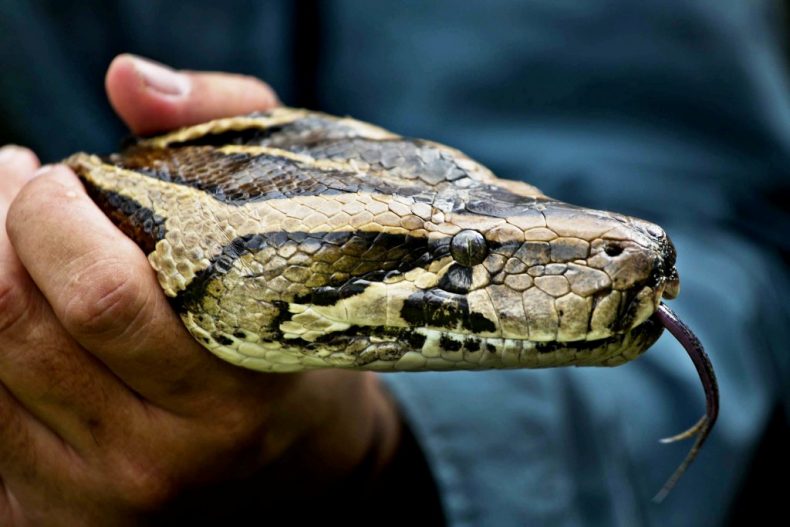 An expert conducts a demonstration of how to handle a python safely. Photo Credit: Flickr

First we destroy their habitats, then we invite them into our homes. All right, “invite” might not be the proper term; let’s say “entice.”

In recent years conflicts between humans and wild animals have been increasing across Malaysia as more and more animals from monkeys to snakes to wild elephants are found to have been setting up residence in or near urban areas. It’s not as if many of these animals have a choice: boxed into shriveled-up habitats with less space and food than previously, they often have no choice but to try their luck in populated areas. 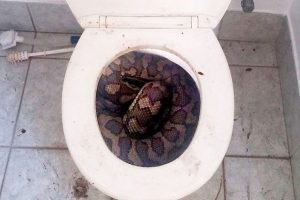 A python is found curled up in a toiler bowl. Photo Credit: Facebook

Of course, many of these “intruders” also respond to the availability of free food in towns and cities, thanks to our wasteful habits. Malaysians are notorious for producing plenty of food waste, much of which ends up in garbage bins and landfills. During the month of Ramadan alone each year, as much as 270,000 tons of food ends up as trash. That amount could feed six times the country’s entire population. Needless to say, it can also feed plenty of animals like rats and other pests.

So we should not be surprised that some animals decide to take advantage of our wasteful ways. Take rats. Discarded food, dumped wantonly in bins and on streets, attracts the rodents while the rodents themselves attract snakes, from reticulated pythons to spitting cobras. That is especially true in urban areas that border rural ones, where you stand a pretty good chance of encountering snakes now and then in your garden, backyard or even home.

“[The snakes] may be slowly adapting to life in cities and reproducing now that their natural habitats (secondary forests) are disappearing,” says Steven Wong, head coordinator of Society Selangor branch Herpetofauna Special Interest Group. All the snakes need are places to hide and some food to eat, both of which are plentiful in many urban areas. “I know a researcher has done some radio tracking of reticulated pythons in Singapore. They do remarkably well in urban areas,” Wong explained. “Reticulated pythons seem to be using the sewer system to move about.”

Needless to say, the presence of the snakes can lead to hair-raising scenarios. “I once had a client who called me to remove a snake that had crawled under a heap of used plastic bottles in their garden,” a snake catcher, Amjad Khan Ali Khan, told the Asia One news service. “When they cleared the place, they were horrified to find pieces of shed snake skin, a sign the spot had become a snakes’ nest,” he went on to explain. “I told them, if they continued to leave the heap there, it will be home to another generation of snakes.”

Not long ago a female resident in Klang City found a reticulated python curled up in her toilet bowl. The serpent had likely slithered into the woman’s toilet via the septic tank. Similar incidents are of course also common in neighboring countries like Thailand, where a man answering nature’s call over a squat toilet was attacked by a python that had been hiding in it.

So what to do? For starters, we can try to keep such unwelcome intruders out by wasting less food and cleaning up in and around around homes. That way we can make our homes less inviting to snakes and the pests that they feed on.